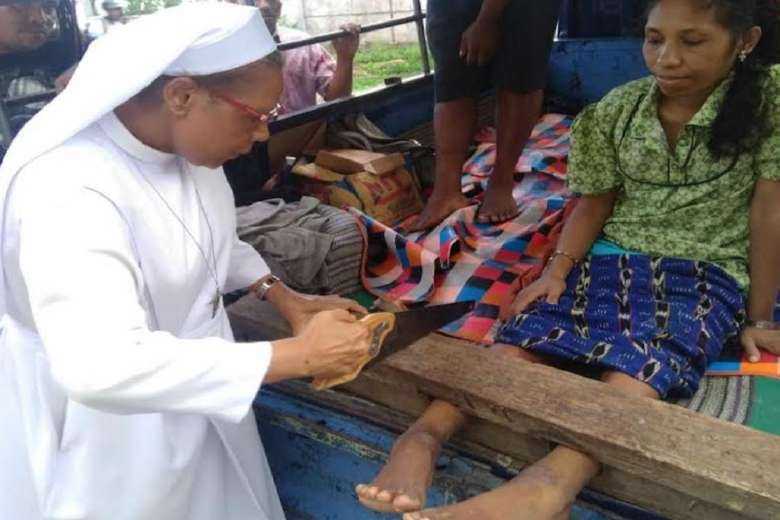 Sister Lucia collects a mentally ill girl shackled by her family to take her to her rehabilitation center in Maumere in Indonesia’s East Nusa Tenggara province. (Photo supplied)

For the last 17 years, an Indonesian nun has dedicated her life to giving mentally ill and disabled people love, care and a better quality of life denied to them by society and even their own families.

It was a mission she felt she had to embark on soon after arriving in Maumere on the Catholic-majority island of Flores in East Nusa Tenggara province.

Sister Lucia, 55, who belongs to the Congregation of the Sisters of Imitation of Jesus, arrived in the town in 2003.

She felt deeply upset after seeing mentally ill people living on the streets and people exploiting the disabled by turning them into beggars and taking much of what people gave them for themselves.

The decision to do something came when 10 deaf and mute girls met her and asked her to teach them how to sew and help take care of them as they were being neglected by their families.

“I told them I could only help with the sewing. To do more required building a special center which required a lot of money,” said the nun, who joined the congregation in 1988.

However, the girls' plea continued to haunt her and finally prompted her to try to raise the funds she needed. Initially, she only raised about US$1,000, but it was enough to get things started on building a center in January 2004.

Intensified fundraising activities and appeals over the following few years managed to raise enough funds for her to complete and open the St. Dymphna Rehabilitation and Training Center.

St. Dymphna was a 7th-century Irishwoman who cared for people suffering from nervous and mental afflictions, was eventually murdered by her own father and became the patron saint of the mentally ill.

“The center is used to treat the mentally ill and the disabled and offer care to those who are labeled as social trash,” Sister Lucia said.

It started with local people bringing relatives and children to the center, but soon others were coming from farther afield including Jakarta, West Java and North Sumatra to be treated after reading about the center on the internet, she said.

More than 700 people have been treated at the center and most of them have recovered or been helped to live independently.

Currently, the center is helping 125 people — 117 women and eight men suffering from with mental illness or physical disabilities. They are being helped by 25 nurses and a psychologist in healing programs that last from four months to as long as five years, she said.

One problem with the mentally ill, she said, is that they have often been shackled by their relatives for many years, weakening their legs to an extent they can no longer walk.

“The conditions they are kept in before we receive them are often quite poor, so many have diseases such as tuberculosis that also need to be addressed.”

When these problems are resolved, they learn skills such as sewing and cooking so that they can earn an income.

Sister Lucia said some young people helped by the center have continued their education through university and are now nurses, teachers or in other professions.

“We don’t only use medical means but also spiritual ones such as prayer, Mass, counseling and therapy. We are only a tool. It’s God who handles and makes them better,” she said.

Sister Lucia said the center is facing many challenges, including the Covid-19 pandemic, and it is a constant struggle to survive, but she adds she is “sure God will help them deal with problems.”

Monthly expenses at the center are about $28,500 to buy food, pay salaries and meet other needs.

Most of this money and food comes through donations from individuals, local government, the Social Ministry and people the center has helped over the years.

Further income comes from little enterprises the nun has set up, such as a restaurant and a place selling coffee, souvenirs and books.

“I must pay salaries,” she said. “My order only gives spiritual support, not funding. So, I must struggle alone.”