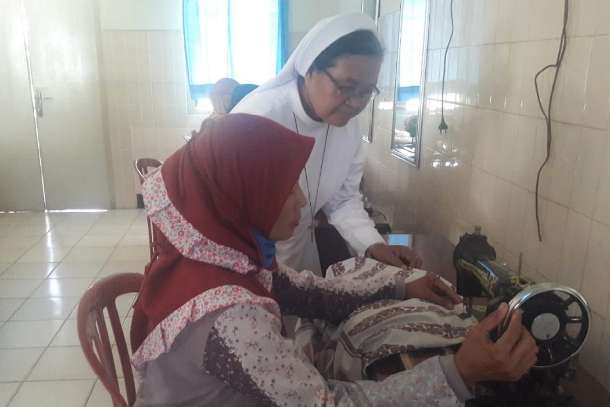 Franciscan Sister Maria Katharina has made it her mission to be a friend to single mothers struggling to survive on Indonesia’s Sumatra island.

“Their lives have been turned upside down by domestic violence or because of their husbands dying,” says the nun from Tanjungkarang Diocese.

“Most of them have practically nothing and either live alone or with relatives who don’t understand their needs and tend to look down on them.”

In 2016, Sister Katharina began helping them by establishing the Association of Single Mothers, a group that reaches out to more than 500 women from various social and religious backgrounds.

Through the association the nun teaches them various skills such as hairdressing, cooking, making accessories, sewing and embroidery. The goal is to help them earn enough money to support their families and for the education of their children.

“We want to help them stand on their own two feet and not rely on the goodwill of others,” Sister Katharina, 61, says.

The nun, who joined the Franciscan Sisters of St. Gregory Martyr congregation in Lampung in 1978, says things are really tough for mothers who have more than three children, especially when it comes to higher education.

“Many of their children end up as elementary or junior high school dropouts and become street singers or manual workers in markets,” says the nun, who has worked in Tanjungkarang Diocese since joining the congregation.

“It makes it difficult for their children to get decent jobs.”

To help the nun, who comes from Klaten in Central Java, are other single mothers whom she previously trained to look after themselves. “Some of them have earned money from their own business, while others have managed to find employment,” she says.

Sister Katharina says what she does is God’s calling to stand up for the poor and marginalized.

She was also inspired by the spirit of St. Francis Assisi, who loved the poor, and the founder of her congregation, Sister Maria Anselma Bopp, who was called to serve the poor.

Her work with the poor began when she was a young nun with street children and pedicab drivers in Lampung.

“My love for the poor, happiness in my work, and prayers have shaped me,” she says.

One of the things she enjoys about her work is working with people from various religious backgrounds — including Muslims — who do not see the fact that she is a Christian as a problem.

Shepherd with the smell of sheep

Sister Katharina says she is always inspired by the words of Pope Francis who called on priests and nuns to “be shepherds with the smell of sheep.”

It means she must face up to the “smell” which symbolizes the distress, pain and suffering faced by the poor and marginalized, including single mothers.

Pope Francis asked the Catholic Church to become a church for the poor. He wanted a church that is “dirty and smelly” representing its delving into the problems that beset people.

“It inspires me to do something, not only to pray but go out to help and meet people, as well as the single mothers and feel their suffering,” says Sister Katharina, who also heads the Franciscan Sisters' Justice, Peace and Integrity of Creation Commission.

The shepherds who smell like sheep mean to fight injustice and serve with love, which is a calling for all Catholics, said the nun, who is also a member of Talitha Kum Indonesia, a group run by women religious congregations to help human trafficking victims.

Susi, 40, one of the single parents helped by the nun, says the sewing and embroidering skills she learned have enabled her to take care of herself and her three children.

“I am happy and proud because, thanks to the nun’s help, I can train other single mothers,” the Muslim woman told UCA News.

"The nun’s dedication shows the Church’s mission and Christ’s face among the marginalized," she says.