On a daily basis, they helped 1,400 Rohingya refugees Indonesia's second largest Islamic organization, Muhammadiyah, has provided healthcare to some of the Rohingya who fled ethnic violence in Myanmar to the Cox's Bazar district of Bangladesh.

Doctor Corona Rintawan led the team that served the Rohingya until Oct. 6, when a second team consisting of two doctors and six nurses succeeded the first one.

Due to the Bangladesh government's visa policy, each medical team's healthcare services can only last for two weeks.

'Muhammadiyah Aid' is coordinated by the Indonesian Humanitarian Alliance for Myanmar.

The alliance was launched by the Indonesian Foreign Affairs Ministry on Aug. 31 and consists of 20 organizations including Muhammadiyah, Nahdlatul Ulama, which is the largest Islamic organization in Indonesia, and Caritas Indonesia.

Rintawan told ucanews.com on Oct. 9 that about 1,500 Rohingya refugees were being helped daily, 40 percent of them children.

The Bangladesh government allows international aid agencies to work in the country only if they cooperate with local non-governmental organizations and the health ministry. 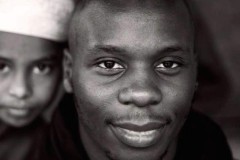 Meanwhile, Father Antonius Banu Kurnianto, director of Caritas Indonesia, has sent letters to all bishops asking them to take an active part in providing humanitarian aid for the Rohingya.

"We have not received any aid yet from them," he said. "But we have committed to sending a sum of money."