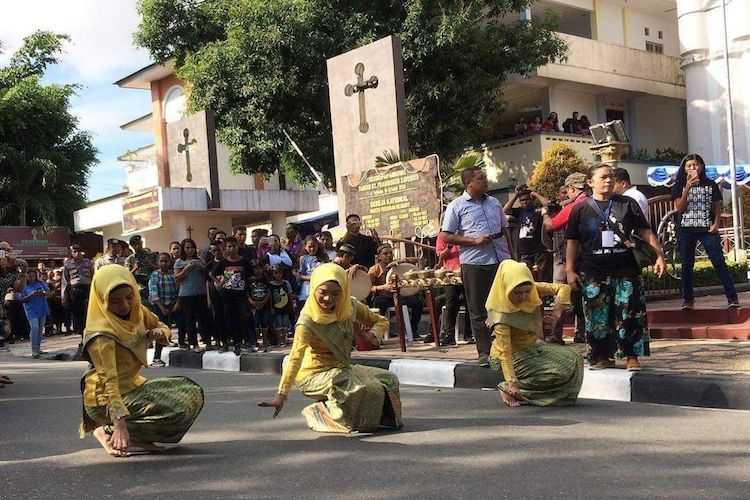 Muslims across Indonesia joined Christians in celebrating Holy Week, providing a welcome boost to those trying to preserve and promote religious tolerance amid growing fears of extremism.

Many photos and videos showing Muslims at churches were posted on social media over Easter.

At St. Francis Xavier Cathedral Parish in Ambon, in Maluku province, dozens of young Muslims performed dances during a procession on Good Friday attended by Bishop Petrus Canisius Mandagi of Amboina and other religious leaders.

Bishop Mandagi said the presence of Muslims showed a determination among people to maintain a brotherhood among different religious communities.

"This is an example of where religion becomes a unifying tool and this religious celebration becomes a bridge to strengthening relations," he told ucanews.com on Easter Sunday.

Saidin Ernes, from the Ambon branch of the Ulema Council — Indonesia's top Muslim clerical body — said they wanted to "show that there is a strong fraternal relationship between religious believers in Maluku," especially among Muslims and Christians.

A photo showing Muslim youths at the Christ the Redeemer Catholic Church in Sentani, Papua was also circulated online.

They held banners that read Happy Easter for Christians. "Let us both maintain the integrity of our fellow religious believers."

In Central Java, students from State Institute of Islamic Religion in Salatiga sang at the Java Christian Church during Easter celebrations on April 1.

Bonar Tigor Naipospos, deputy chairman of the Setara Institute for Democracy and Peace said the governor's attendance would have significant influence "despite a wave of conservative and anti-diversity revivalism," sweeping some parts of the country through extremist groups such as the Islamic Defenders Front .

"We need such examples to educate the public, that differences of beliefs should not make us hate and demean each other," he said.

"We can then be optimistic that there are always groups that take care of diversity," he said.

Holy Week in Indonesian churches this year focused on maintaining diversity through the national ideology under the theme, "Implement Pancasila: We are Diverse, We are Indonesia," in response to growing intolerance among hard-line groups, especially since the Jakarta governor election last year which was marked by sectarian divisions and hate speech.