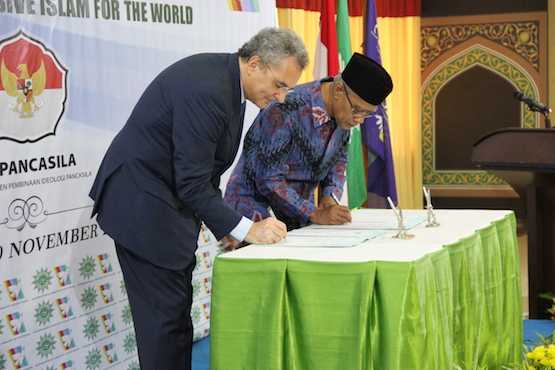 Indonesia’s second largest Islamic organization, Muhammadiyah, and the Community of Sant’Egidio have declared a joint commitment to promote tolerance amid a rising tide of radicalism in the predominantly Muslim country and also worldwide.

A memorandum of understanding on interfaith and intercultural peace building was signed on Nov. 10 in Jakarta by Muhammadiyah chairman Haedar Nashir and Sant’Egidio president Marco Impagliazzo.

It was the second MoU between the organizations. The first was signed in April 2012 and was aimed at promoting peace through interfaith dialogue between Muslims and Christians.

Both parties have agreed to work together in education, to build a global network, and create a bridge of peace.

Impagliazzo said both organizations have carried out several activities together since the first MoU was signed.

“We became involved in interfaith dialogue as conflicts and radicalism emerged in the world. We took part in the peace process in Mindanao, in the Philippines, and in distributing aid to Rohingya refugees in Bangladesh,” he said.

Both organizations, he said, have developed a strong relationship of dialogue and cooperation with full respect for diversity.

“We are convinced that dialogue and cooperation are fundamental in building peace,” he said.