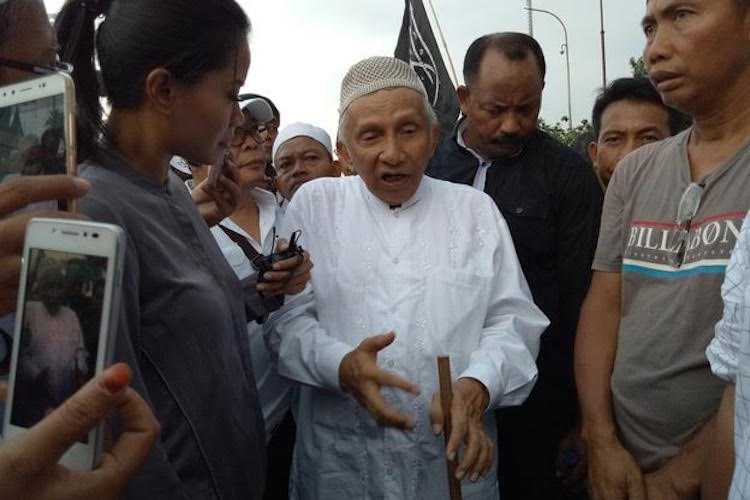 Amien Rais, patron of the Islamic-based National Mandate Party and former chairman of Muhammadiyah, the second-largest Islamic organization in Indonesia, speaks to reporters during a protest on Oct. 24, 2017, in Jakarta. (Photo by Ryan Dagur/ucanews.com)

An Indonesian Islamic leader has had blasphemy and hate speech allegations filed against him after he gave a controversial sermon in a mosque.

Amien Rais, the former chairman of Muhammadiyah, the second-largest Islamic organization in Indonesia, has had a police report filed against him by Aulia Fahmi, the head a group of lawyers known as the Legal and Advocacy Desk at Cyber Indonesia.

The police report accuses Rais of allegedly disseminating information aimed at inciting religious hatred or hostility during a sermon where he declared some political parties were aligned with God and the rest were aligned with Satan.

Rais, who is also patron of the Islamic-based National Mandate Party (PAN) and former chairman of the People's Consultative Assembly, allegedly made the statement during morning prayers at a South Jakarta mosque last week.

The 73-year-old said that PAN, the Islamic-based Prosperous Justice Party (PKS) and the Great Indonesia Movement Party (Gerindra) were hizbullah (the party of God) while the Satanic group was made up of people against God and those who joined an unspecified "big political party."

His statement has been criticized by some in Indonesian society.

"It is not right. Do not create dichotomy … It is very dangerous," he told reporters.

Father Paulus Christian Siswantoko, executive secretary of the Indonesian bishops' Commission for the Laity, told ucanews.com that he regarded the police report as "a reminder to all of us that everyone is equal before the law and must be very careful in delivering statements."

"Everyone has the right to express their thoughts as it is guaranteed by the law," said Father Siswantoko. "But please say something good in accordance with public ethics and the values of mutual respect."

The priest said that a religious leader should create a peaceful situation instead of delivering unclear statements which could be misinterpreted. "Anything can be politicized and create chaos right now," he said.

Sebastinus Salang, a political analyst from Indonesian Parliament Watch, said many involved in politics are using any means — including sermons — to get their political message across.

"I think Amien Rais' statements aimed only to create a controversy," he said. "I would suggest that he, as a senior politician, should show a good example by delivering wise statements and doing wise deeds."