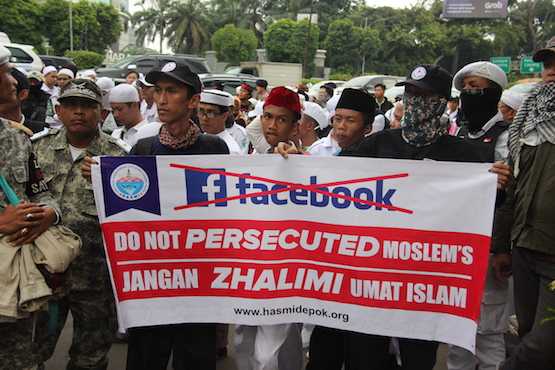 Protesters hold a banner in front of the office of Facebook Indonesia in South Jakarta on Jan. 12. (Photo by Konradus Epa/ucanews.com)

Muslim activist Slamet Maarif told ucanews.com on Jan. 12 that a complaint had been lodged with Facebook Indonesia.

He was among activists who in late 2016 protested against the Christian then governor of Jakarta, Basuki Tjahaja Purnama, who had maintained there was no Islamic prohibition on Muslims voting for non-Muslims.

After failing to be re-elected to the post, he was imprisoned for blasphemy.

Al-Athos, coordinator of the protest, called on Facebook Indonesia officials to explain their criteria for blocking the Islamic accounts.

He said the accounts were blocked before and after a gathering on Dec. 2, 2017, to mark one year since the holding of a mass rally against the former Jakarta governor.

But he suggested that the account blocking was linked to a National Cyber Agency established by President Joko Widodo in May 2017.

Responding to the protest, Facebook said the company wanted people to feel safe while connecting and posting on its platform.

“We allow people to use Facebook to challenge ideas and raise awareness about important issues, but we will remove content that violates our community standards,” a company spokesman said.

He added that Facebook prohibited organizations and individuals from promoting hatred and violence.