Ahmad Mustofa Bisri, known as Gus Mus, won the Yap Thiam Hien Award for his dedication to human rights and diversity in Indonesia. (Photo from his Facebook account)

A cleric from Nahdlatul Ulama, Indonesia's largest Islamic organization, has won the 2017 Yap Thiam Hien Award for his efforts in upholding human rights and promoting diversity through writing.

Ahmad Mustofa Bisri, known as Gus Mus, is the first Muslim cleric to receive the award, which was established by the Jakarta-based Human Rights Study Center Foundation in 1992 to honor the late Yap Thiam Hien (1913-89), a noted lawyer and human rights defender in Indonesia.

Maritime Affairs and Fisheries Minister Susi Pudjiastuti presented the award to the 73-year-old leader of Raudlatut Thalibin Islamic Boarding School in Rembang, Central Java, on Jan. 24 at a ceremony in Jakarta.

Gus Mus had shared with people his ideas through poems and never took part in any protests, he said.

"He fights for inclusivism with all his soul and energy. He commits to uphold the state philosophy of Pancasila (five principles). He is a figure who can become a bridge of peace," he said. 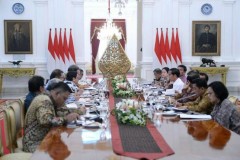