Indonesian police arrest a protester during a rally against a gold mining company in Pesanggaran in Banyuwangi district of East Java which allegedly did not follow Covid-19 restrictions. (Photo courtesy of JATAM)

Indonesian environmental groups have urged the government to freeze the activities of mining firms ignoring Covid-19 health protocols after dozens of mine workers were infected by the deadly virus.

More than 5,000 mining companies are operating in Indonesia.

“Mining companies are ignoring social distancing rules imposed by the government. They ignore workers’ safety,” the Anti-Mining Network (JATAM) said in a statement on May 6.

Despite the pandemic, workers were being exposed to unhealthy working condition, exploitation and intimidation, the groups said citing a March 31-May 4 survey.

Workers were living in overcrowded boarding houses and had poor access to health facilities, JATAM said, adding companies did not routinely check on workers’ health or apply social distancing measures as required by the government.

JATAM coordinator Merah Johansyah Ismail said companies were forcing workers to work despite the risk of infection under a “no work, no pay” policy.

“Thousands of mining workers are being put at risk, which shows how much companies prioritize profit over people’s safety,” Ismail told UCA News.

He pointed to 52 employees of Freeport McMoRan Indonesia, which runs the world’s largest gold mine in Papua’s Mimika district, who have been infected with Covid-19.

“Companies with workers infected with Covid-19 must stop operations to prevent the virus from spreading to fellow workers,” he said. 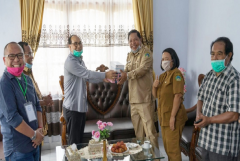 Gunretno, coordinator of the Kendeng Mountain Community Network, another anti-mining group, also called on the government to suspend mining activities. His call came after an accident at a quarry in Blimbing in Central Java killed two workers and injured four others on May 6.

“Despite the Covid-19 pandemic, mine companies in the region have forced their employees to work overtime while neglecting physical distancing,” he said.

Franciscan Father Peter C. Aman, director of the Franciscan Commission for Justice, Peace and Integrity of Creation, said the companies should take it on themselves to cease operations.

“Mining companies cannot exclude themselves because many other firms have stopped activities [due to the coronavirus],” he told UCA News. “Mining companies must respect workers. They are not slaves.”