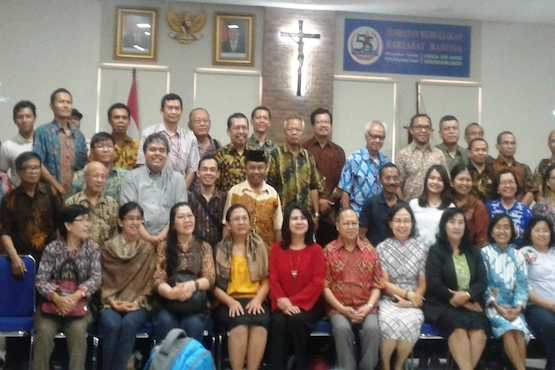 Catholic lecturers attend a meeting to discuss various problems that faced them now in their campuses included radicalism. (ucanews.com photo)

Catholic lecturers in Indonesia have pledged to combat growing extremism on campuses by conducting regular interfaith forums in universities as means of dialogue with lecturers belonging to other faiths.

At a meeting at the Jakarta cathedral on Nov.18 more than 150 Catholic lecturers from universities around the greater Jakarta area and some parts of West Java, agreed to take tangible measures to try and curb growing extremist behavior among students.

It comes in response to a survey conducted by the National Anti Terrorism Agency this year that revealed that nearly 40 percent of university students in Indonesia demonstrated having a radical mindset. According to government statistics, there are about 800,000 students throughout the country.

Many Muslims who took part in demonstrations late last year and earlier this year accusing the former Christian governor of Jakarta, Basuki Tjahaja Purnama of blasphemy, were university students.

Suspects arrested in recent terror plots, including one to set off pressure cooker bombs across Jakarta, included university students.

"Extremism is a huge threat to this country, and it is more worrying if students as future leaders have a radical mindset," said Adrianus Meliala, a professor of criminology at the University of Indonesia, told ucanews.com after the meeting organized by Jakarta Archdiocese.

They agreed to conduct regular interfaith forums within universities starting at the end of November at the University of Indonesia, which is expected to include about 250 Catholic lecturers and a number from various other faiths teaching at state-run and private universities.

Earlier, Indonesia’s Research, Technology and Higher Education Minister, Muhammad Nasir, had warned that almost all university elements, from students to lecturers, across Indonesia have been influenced by radicalism

It was a dangerous sign and which could cause "national disintegration," he said.

Fransisco Budi Hardiman, a lecturer at the Driyarkara School of Philosophy in Jakarta, called on Catholic lecturers who teach in non Catholic universities to take the responsibility of engaging in dialogue seriously.

He said Catholic lecturers have the responsibility to ensure that universities are not derailed from their task to educate students in accepting religious or ethnic differences and caring for social justice.

"It’s not only against radicalism, lecturers should also play an important role in fighting against moral ills, such as casual sex and drugs," he said.

Brother Heribertus Sumarjo, chairman of Jakarta Archdiocese’s Commission for Education, said the Nov. 18 meeting aimed to bring together Catholic lecturers teaching in non Catholic institutions and encourage them on their mission.

The Immaculate Conception brother said the church is saddened by the loss of a sense of community among university students, and hoped Catholic lecturers can fix it.

At the end of their annual meeting on Nov. 16, Indonesian bishops issued a pastoral message also encouraging Catholics to build dialog with people from other religions, to minimize extremism and intolerance in society.