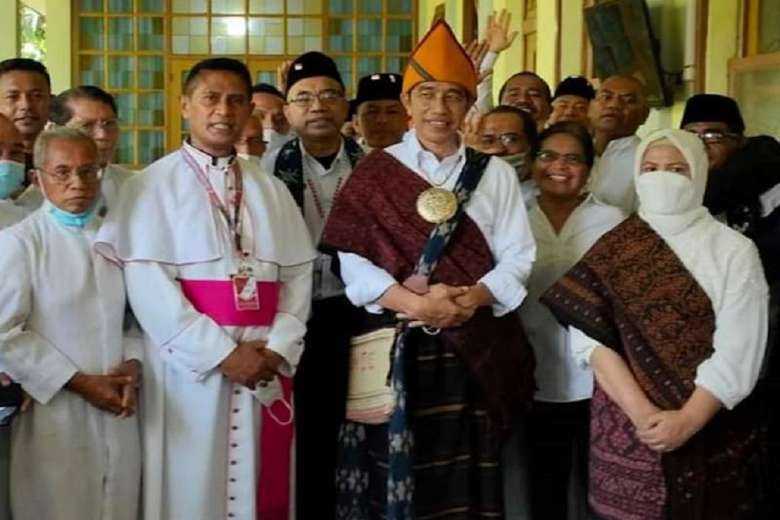 Indonesian President Joko Widodo paid tribute to the country’s Catholics on June 1 by celebrating the 77th anniversary of the introduction of the national ideology on Flores island in predominantly Catholic East Nusa Tenggara province.

The annual ceremony in the city of Ende was the first time it had been held there since Pancasila, or the Five Principles, was introduced by the first Indonesian president, Sukarno, on June 1, 1945.

The ideology stipulates belief in one God, a just and civilized society, a united Indonesia, democracy guided by consensus, and social justice for all citizens irrespective of religion.

Widodo chose to celebrate the occasion in Ende because it is known as “The City of Pancasila” after the ideology was drawn up by Sukarno when he was exiled there by Dutch colonial rulers between 1934 and 1938.

“Sukarno's inspiration for Pancasila came because of the warmth he felt from the people of Ende,” Widodo told the large crowd gathered for the event.

Pancasila, he said, “has become a star that leads the Indonesian people in facing various challenges in the country.”

He called on all Indonesian people to adopt Pancasila’s values in their daily life.

After the ceremony, Widodo visited a small museum called Serambi Sukarno dedicated to the first president at St. Joseph Monastery, run by the Divine Word congregation.

The monastery was where Sukarno built a strong friendship with Divine Word missionaries such as Dutch priests Gerardus Huijtink and Johannes Bouma.

Widodo was welcomed by Archbishop Vincentius Sensi Potokota of Ende as well as several priests, nuns and brothers.

“Sukarno often took the time to talk with the priests at the monastery. He also borrowed books from them,” Archbishop Potokota told Widodo.

“Pancasila must become a symbol so that we have a sense of humanity, unity and justice"

Matheus Wangge, a local Catholic, said he was proud to meet the president.

“The president’s visit shows he’s a simple and close leader to the people. He even distributes aid packages and money to local people. We are thankful for his visit. He embodies Pancasila values,” he told UCA News.

Iprianus Laka Mau, chairman of the Ende branch of the Union of Catholic Students of the Republic of Indonesia (PMKRI) said the president's visit tells local Catholics they are not forgotten people.

Father Antonius Benny Susetyo, a member of a presidential unit promoting Pancasila, reiterated that sentiment, adding: “Pancasila must become a symbol so that we have a sense of humanity, unity and justice,” he said.