Indonesian lawmakers back pardon for woman in sex-pest case Indonesia’s parliament has unanimously agreed that President Joko Widodo should grant a pardon to Baiq Nuril Maknun, a schoolteacher convicted of recording lewd comments made to her by her boss. (Photo supplied)

Indonesian lawmakers have approved granting a pardon to a woman convicted of recording a phone call from her boss to prove he was sexually harassing her.

The approval on July 25 followed a recommendation from President Joko Widodo that Baiq Nuril Maknun, 37, be granted a pardon after the Supreme Court rejected her appeal against her conviction, in a decision that many critics said was a miscarriage of justice.

The mother of three, who worked as a schoolteacher on the island of Lombok, recorded a phone conversation in 2012 with the school’s headmaster who she had accused of sexually harassing her.

The recording was later used in an official complaint against the man by one of her colleagues and also went viral on social media resulting in the head teacher being fired.

He then laid a police complaint against Maknun for distributing the recordings.

Maknun said a friend took the recordings off her phone and distributed them.

The Supreme Court sentenced her to six months in prison in September last year for uploading indecent material in contravention of the country’s computer crime laws, which some observers say are often used to silence critics.

The court also fined her 500 million rupiah after overturning a lower court’s verdict in 2017 that found her not guilty.

An appeal to review the Supreme Court decision was rejected by the same court earlier this July. 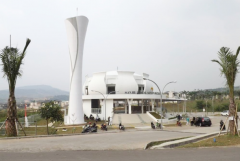 “It means parliament really supported her. And this means a lot to her,” he told ucanews.com.

“By granting her a pardon, the state has shown it concern for protecting human rights particularly women who are victims of violence,” he said.

Azas Tigor Nainggolan, coordinator of the human rights desk of the Indonesian bishops’ Commission for Justice and Peace, said parliament made the “right decision.”

“Maknun faced injustice. And members of the House of Representatives realized that the court verdict must be annulled,” he said.