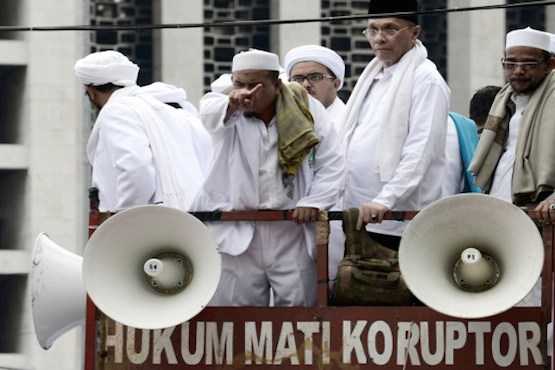 Indonesian Muslim leaders incite thousands of protesters against Jakarta governor Basuki Tjahaja Purnama, known by his nickname Ahok in Jakarta. Muslim hardliners say they will repeat a tactic of using mosques to garner votes for Muslim candidates in future polls after it worked in helping oust Ahok as Jakarta governor. (Photo by Goh Chai Hin/AFP)

Radical group Islamic Defenders Front (FPI) will spread its tactic of using mosques to sway voters in next year's regional elections and the 2019 presidential poll.

The group's leaders claim that the use of dakwah, or preaching, at mosques has been effective to garner votes for Muslim candidates as seen in the recent election for Jakarta governor, which saw Muslim Anies Rasyied Baswedan defeat incumbent Chinese Christian Basuki Tjahaja Purnama, or Ahok.

Now the group, which claims to have more than 7 million members around Indonesia, plans to use the same strategy in upcoming regional and presidential elections.

FPI spokesman Slamet Maarif told media recently that the blasphemy case faced by Ahok since late September contributed to his defeat but that the use of preaching at mosques played a significant role in garnering votes for the Muslim candidate ahead of the election, describing the strategy as "incredible."

The chairman of the FPI's counseling council Habib Muchsin Alatas said the strategy was used because "it is effective" and "is in line with the teachings of the Quran."

"It is our principle not to vote for non-Muslim leaders in areas where Muslims are the majority group," he told ucanews.com on April 24.

He mentioned Bali as an example. "Local people will not vote for non-Hindus, and we respect it. In Jakarta, Muslims are the majority group, and we called on Muslims not to vote for non-Muslim candidates. And in fact, Ahok faces the blasphemy case," Alatas said.

"The two factors [Quran teachings and the blasphemy case] cannot be separated," he added.

"We will continue to preach at mosques to garner votes for Muslim candidates so that Muslims become aware [of whom they should vote for]. This is our obligation."

He even said his group will use the strategy in next year's regional and local elections as well as the 2019 presidential election.

In June 2018, at least 17 provinces, 39 municipalities and 115 districts will hold regional elections simultaneously, including Bali province.

In May 2019, the world's largest Muslim country will hold its five yearly presidential election.

Christians, however, believe the FPI's strategy could threaten national unity.

"It is clearly stated in existing regulations that electoral campaigns must not be held in places of worship. Look at churches, we never hear about priests telling Catholics to vote for a certain candidate in an election," he said. "For sure, it is against the law."

According to Petrus Salestinus, a member of the Indonesian Advocate Association, using mosques to garner votes for a candidate prior to the election of a governor, district chief or mayor is against the law.

"This is a crime. Actually, anyone can file a police report against violators," he said.

However, due to an anomaly in the law punishments are only meted out in cases of district head and mayoral election violators, he said.

Budhisedjati also expressed concern about national disunity if the strategy is used in upcoming elections.

"I am afraid that Indonesia would be like Syria," he said, suggesting that all religious followers should work together in promoting tolerance.