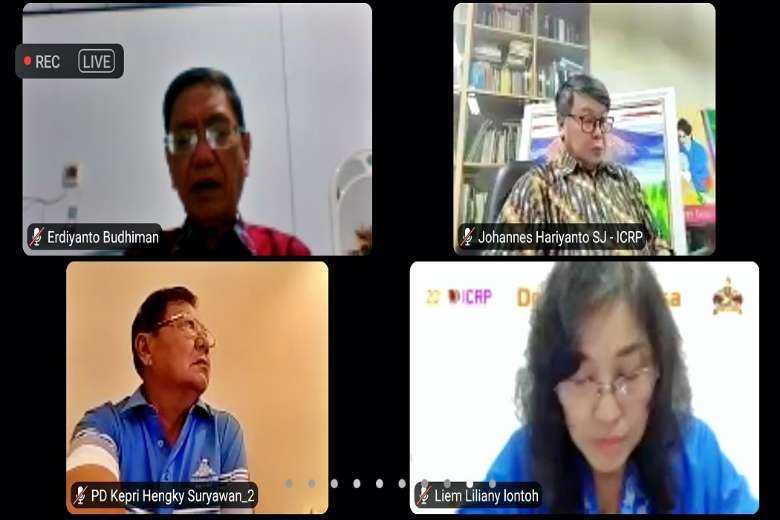 Interfaith leaders in Indonesia held a virtual prayer session on Jan. 20 calling for a speedy end to the Covid-19 pandemic and for support for victims of recent disasters.

Carmelite Father Aegidius Eko Aldianto, executive secretary of the Indonesian bishops’ Commission for Justice and Peace, was among leaders from the country’s six recognized religions — Buddhism, Catholicism, Confucianism, Hinduism, Islam and Protestantism — who took part in the two-hour event.

Representatives of local traditional beliefs also took part in the session organized by the Jakarta-based Indonesian Conference on Religion on Peace (ICRP).

“Dear compassionate Lord, it has been 11 months since the Covid-19 pandemic hit our country. We realize that this pandemic is a real issue that often makes us afraid and worried. But we believe that we will be able to end it,” Father Aldianto said. Indonesia, like many other countries around the world, has been hit hard by the pandemic and the number of cases has continued to rise. As of Jan. 20, Indonesia had recorded 939,948 Covid-19 cases and 26,590 deaths. “We also pray for our friends and relatives as well as those who have lost loved ones due to the coronavirus. Give them the strength to carry on amid this difficult situation,” the priest said. In his message, Bishop Yohanes Harun Yuwono of Tanjungkarang, chairman of the Indonesian bishops’ Commission for Ecumenical and Interreligious Affairs, called on people to continue observing health protocols. “By doing so, what has been done by the government and all of us can bear fruit. It is for the sake of the nation,” he said. The prelate called for prayers and help for those affected in recent disasters to hit the country. They included a plane crash, landslides, earthquakes and flash floods that killed many people. On Jan. 9, an aircraft crashed shortly after take-off on an internal flight from Jakarta, killing all 64 passengers and crew on board. The same day, landslides in Sumedang district of West Java province killed at least 40 people. Six days later, a 6.2 magnitude quake rocked West Sulawesi province, killing more than 90. Also offering a message was Mukti Ali Qusyairi from the Indonesian Ulema Council, the top Muslim clerical body. He stressed the importance of promoting unity in times of trouble. “Our nation is strong enough. The key is to strengthen a sense of brotherhood. Unity must be promoted among people from different religious and ethnic backgrounds,” he said. “Anyone, no matter their religion or where they come from, can be infected by the coronavirus. It is our common enemy, so we have to deal with it together.” ICRP general secretary Father Johannes N. Hariyanto later told UCA News that the prayer session was to meant to keep people’s spirits up. “The pandemic is a long-term issue. And while medical efforts are needed, fighting against despair is also important. We wanted to remind people that we must deal with this threat together despite our differences,” the Jesuit priest said.