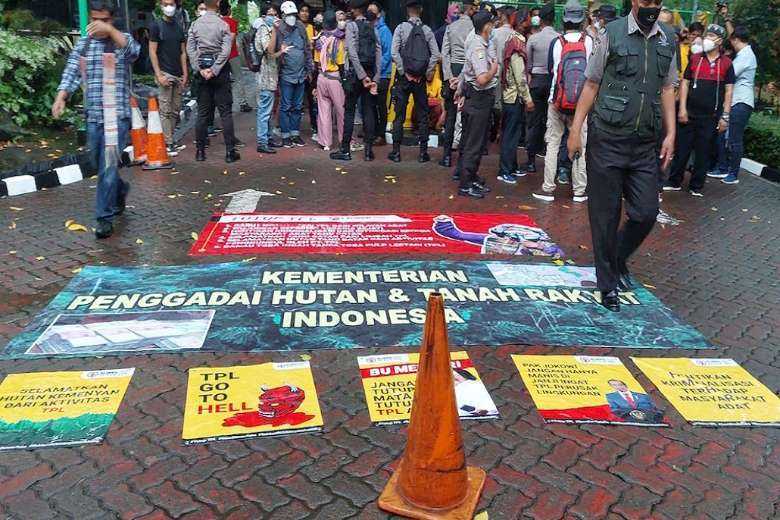 Tano Batak indigenous people and activists stahe a demonstration in front of the Environment and Forestry Ministry in Jakarta on Nov. 25. (Photo supplied)

Tano Batak indigenous people in North Sumatra will continue protests in Jakarta after several protesters were arrested at a demonstration outside Indonesia's Environment and Forestry Ministry.

They are urging the government to close Toba Pulp Lestari because it has caused heavy damage to the environment around Lake Toba and created conflict between local people and the pulp company.

Lake Toba was designated by the government as an international destination and the site of a super-volcanic eruption that occurred about 75,000 years ago. Measuring 100 kilometers in length and 30 wide, it is the largest lake in Indonesia and the largest volcanic lake in the world.

Members of the Tano Batak community went to Jakarta to lodge a complaint with President Joko Widodo, several ministers and other government officials about the ecological damage caused by the company.

On Nov. 25, they sought to meet Siti Nurbaya Bakar, minister of environment and forestry, to ask her to revoke the permit of Toba Pulp Lestari, but she couldn’t meet them. They held a demonstration outside the ministry during which police arrested 21 people and detained them for five hours before they were released.

Several NGOs, including the Indigenous Peoples’ Alliance of the Archipelago and the Indonesian Forum for Living Environment, have supported their meetings in Jakarta and taken part in their demonstrations.

The company has caused deforestation around Lake Toba which has led to frequent flooding, putting the lives of people at risk from mudslides and inundation

"We will continue our actions until the officials meet us to resolve the case because we have struggled for more than 20 years," Delima Silalahi, director of the Study Group and Community Initiative Development in Parapat, North Sumatra, told UCA News on Nov. 29.

Silalahi, who is also coordinator of the Tano Batak group, said police did not commit repressive acts and arrest them because they represent thousands of people around Lake Toba seeking to protect the environment.

“The company has caused deforestation around Lake Toba which has led to frequent flooding, putting the lives of people at risk from mudslides and inundation,” she said.

Silalahi said they want to get the president’s promise that he and the Environment and Forestry Ministry will resolve the agrarian conflict between the indigenous people and the company.

Father Hilarius Kemit, director of the Capuchins' Justice, Peace and Integrity of Creation in Sumatra, said the Church backs the group’s quest for justice from the government.

“Since the beginning of the case, the local Church has voiced concerns over the company because it has caused conflict with the local people,” Father Kemit told UCA News.

The priest said the lake must be freed from operation of the companies destroying the environment.

“We hope the police don’t resort to violence and arrest the indigenous people because they only hold a peaceful action to give a voice to local people,” he said.