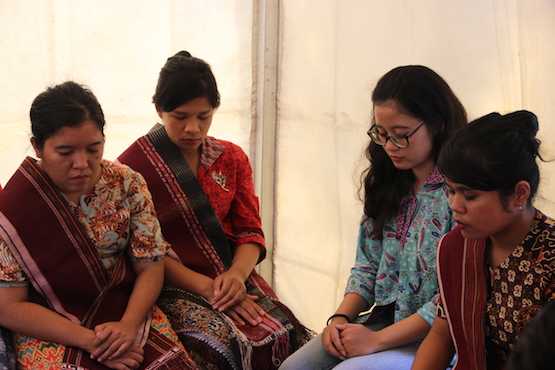 Followers of indigenous faiths pray during a program held by the Community of Sant’Egidio in Jakarta, in this file photo. A court ruling in Indonesia declaring the omission of indigenous faiths on ID cards unconstitutional has prompted followers to demand full recognition from the government. (ucanews.com photo)

Followers of indigenous faiths in Indonesia have called for full recognition from the government after a court ruled that they have the same administrative rights as followers of the country’s six recognized religions.

The Constitutional Court ruled on Nov. 7 that a 2013 law prohibiting followers of indigenous faiths listing their religion on their identity cards was unconstitutional.

The law stipulates that the column on identity cards set aside for religion be left blank for citizens whose faiths are not recognized by the constitution.

People who do not have their religion on their identity cards often say it is difficult to obtain basic social services and government jobs.

The government recognizes Buddhism, Catholicism, Confucianism, Hinduism, Islam and Protestantism, yet there are about 200 indigenous faiths in Indonesia with about 12 million followers.

“I feel grateful. But now I want the government to follow the ruling and officially recognize my faith and the religions of others by having them entered on our identity cards so we can be entitled to the same rights as others,” Saraswati, a Kapribaden follower, told ucanews.com.

Kapribaden, is a spiritual practice aimed at obtaining self-understanding before knowing God.

Because the religion column was left blank “I had to study Islam at school. I felt like I was being forced to do so, because that is not what I believe in,” she said.

For Dewi Kanti, a Sunda Wiwitan follower, the court ruling now represents “‘a debt that the government now has to pay.”

Sunda Wiwitan, which venerates the power of nature and the spirits of ancestors, has more than 15,000 followers and is the native faith of Sundanese people, which has been followed since before Hinduism arrived on the archipelago around the first century AD.

“Our community is not a threat to the nation. We want to strengthen diversity. This is why we exist,” she said.

Engkus Ruswana, an official at the Indonesian Native Faiths Council, hoped that the rights of indigenous faith followers would be ensured following the court ruling.

“Many followers still find it difficult to get jobs in government institutions such as the civil service, military or police,” he said.

“If citizens of whatever faith wants their religion listed on their identity card, the state must do it,” he said.

Andreas Harsono, Indonesian researcher at Human Rights Watch, called on the government to use the court ruling as a starting point to abolish all discriminatory regulations that target religious minorities.

“As long as they remain on the books, the rights of Indonesia’s religious minorities will remain in peril,” he said.

So far Religious Affairs Minister Lukman Hakim Saifuddin has responded to the court ruling by only recommending a review of religious studies in schools.