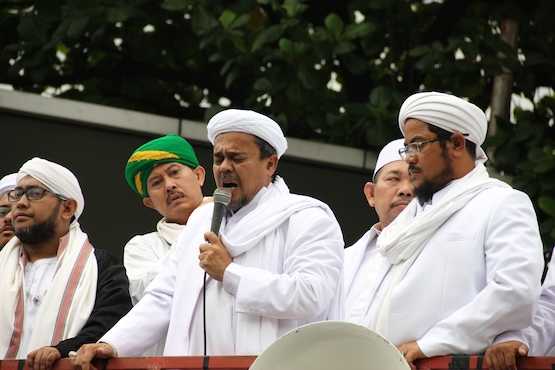 Jakarta police issued a warrant on May 30 for the arrest of Muhammad Rizieq Shihab, leader of hard-line group Islamic Defenders Front (FPI), after naming him as a suspect in a pornography case.

Shihab, who is currently in Saudi Arabia, refused to answer a police summons in April and again in early May to come forward as a witness in a case involving himself and a female activist — Firza Husein.

Shihab and Husein are accused of sharing pornographic material in WhatsApp chats.

"With the arrest warrant, investigators will go to the suspect's house," Jakarta Police spokesman Sr. Comr. Raden Prabowo Argo Yuwono told reporters, adding that investigators will also look for information from the immigration office about the cleric's exact whereabouts.

On May 29, Jakarta police raised Shihab's status from witness to suspect after gathering "adequate evidence."

Husein was already named a suspect in the case a few days before. Both will be charged under the 2008 Pornography Law, which carries a sentence of more than five years in prison.

"I do not know if there is already an arrest warrant. We will face it whatever it takes," Sugito Atmo Prawiro, who heads the FPI's legal team, told reporters.

Petrus Salestinus, a member of the Indonesian Advocate Association, said police now have the authority to bring Shihab home.

"They have no choice but to return him from his hiding place so he can take responsibility," he said.

He also called on police to deal with other cases involving Shihab including a complaint made by Angelo Wake Kako, chairman of the Indonesian Catholic Students Association.

In December 2016, the association filed a blasphemy complaint against Shihab after he allegedly insulted Christianity by ridiculing the birth of Jesus in a speech.

"It has been six months but there has been no significant progress," Kako said.

"In a modern and civilized society and in a state that upholds the law, all issues should be resolved through the law. The law [will] deal with disputes," he said.