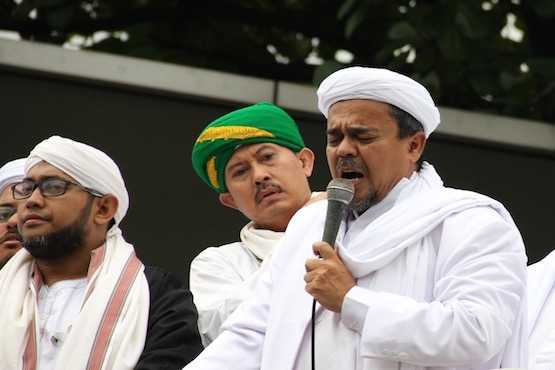 Muhammad Rizieq Shihab (right) delivers a speech during a protest in Jakarta in this Oct. 14, 2016 file photo. Shihab, who is currently in Saudi Arabia, is wanted in Indonesia in connection with a pornography case. (Photo by Ryan Dagur/ucanews.com)

An exiled radical Muslim leader wanted in a pornography case has again broken a pledge to return to Indonesia to face charges, prompting veiled criticism from a fellow hardliner.

Muhammad Rizieq Shihab, head of the controversial radical group Islamic Defenders Front, was supposed to return to Indonesia from Saudi Arabia on Feb. 21.

It was the fifth time he has reneged on a pledge to return to the country since fleeing to the Middle-Eastern country last year.

He told supporters in a phone call that his failure to return was because he needed to seek God's guidance.

About 1,500 police and military personnel had been deployed in and around Jakarta's international airport to arrest Shihab on his return.

Shihab, whose group is blamed for committing a number of violent attacks on religious minorities, is accused of sharing pornographic material in WhatsApp chats with a female activist.

He fled the country in May last year when Jakarta police issued a warrant for his arrest after he refused to answer a police summons. He also faces possible blasphemy charges stemming from a complaint by Catholic students who accused Shihab of ridiculing the birth of Jesus in a speech that was widely circulated on the internet.

His failure to return prompted criticism from another leading Muslim hardliner, who said Shihab should have the courage to face his accusers.

Faizal Assegaf, co-founder of Presidium of 212 Alumni, an alliance of Islamic hard-line groups, told ucanews.com that Shihab should take a leaf out of former Jakarta Christian Governor Basuki Tjahaja Purnama's book and face the charges.

Presidium of 212 Alumni was founded following a protest involving thousands of Muslim hardliners who demanded Purnama, also known as Ahok, be arrested for blasphemy in 2016.

Ahok was later sentenced to two years in prison after being found guilty of insulting the Quran.

"Both Rizieq [Shihab] and Ahok are equal before the law," Assegaf said.

"[Ahok] attended his trial and sought a clear resolution to his case. Although the outcome was a surprise as it was thought the outcome would favor the former governor," he said.

He said he believed the case against Shihab would be more difficult to prove, "So he should immediately look to wrap up his case quickly through the legal process."

All Muslim clerics, he said, should respect the law and see it as a "civilized and dignified matter."

His comments sparked some criticism from within his organization's own ranks by members offended by his comparing Shihab with a Christian.