Families of enforced disappearance victims participate in silent rallies outside the presidential palace in Jakarta every Thursday to demand the government settle human rights abuses. (Photo by Konradus Epa/UCA News)

Rights groups have condemned the Indonesian government for appointing two former generals allegedly involved in kidnappings and enforced disappearances to senior posts in the Defense Ministry.

President Joko Widodo last week approved the appointment of Brig. Gen. Dadang Hendrayudha and Brig. Gen Yulius Selvanus as general director of defense potency and head of the defense strategic installation bureau respectively to assist Defense Minister Prabowo Subianto.Both were allegedly involved in the abduction of pro-democracy activists in 1997 and 1998.
Subscribe to your daily free newsletter from UCA News
Thank you. You are now signed up to Daily newsletter
At least 23 people were kidnapped by the military during protests against former dictator Suharto, of whom nine survived, 13 remain missing and another was found deadSubianto was commander of a group of elite soldiers allegedly behind the abductions. Both generals were members of the team.Defense Ministry spokesman Dahnil Anzar Simajuntak said the appointments were aimed at “bringing in fresh ideas." Amnesty International Indonesia, the Commission for the Disappeared and Victims of Violence and other human rights abuse victims’ groups condemned the move.“The appointment of the two generals goes against the government’s promise to settle past human rights abuses,”  Usman Hamid, executive director of Amnesty International Indonesia, told UCA News.Hamid accused President Joko Widodo of denying victims and families their right to justice by rewarding people “involved in crimes against humanity,” he said.Amnesty called on the government to investigate and settle past cases through legal justice and to pay compensation to the families of the disappeared.
Related News 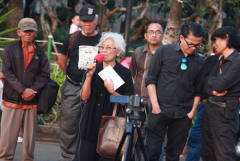 “Instead of pursuing those suspected of being responsible for criminal actions, the government opens the door of opportunity for them with positions of power. This is an insult to human rights,” Hamid said.

Fatia Maulidayanti, director of the Commission for the Disappeared and Victims of Violence, said the appointment of Hendrayudha and Selvanus shows that impunity thrives in the Indonesian government.“It shows that the state ignores human rights. Giving abusers key posts violates international human rights standards,” she told UCA News.It also goes against Indonesia’s commitment made to the United Nations Human Rights Council’s 2017 Universal Periodic Review session to immediately ratify the International Convention for the Protection of All Persons from Enforced Disappearance.“If the perpetrators are still actively involved in government, how can Indonesia prevent and settle cases of enforced disappearance and other gross human rights abuses?” she asked.Maria Catharina Sumarsih of the Victim Solidarity Network for Justice said President Widodo has lied to the Indonesian people.“[He] protects human rights abusers ... The appointments invite the military to abuse again,” she said.
Support our Catholic journalism with a contribution of any size
Your contribution will help the Catholic journalists and editors in UCA News to report news, features, commentaries, video stories and podcasts on issues affecting the lives of millions of Catholics around the world.
Here is a gift of two valuable books as a token of appreciation to you.
Check your mailbox for links to these PDF/e-Books.