Covid-19 to dampen end of Ramadan celebrations, with social distancing likely to last until August 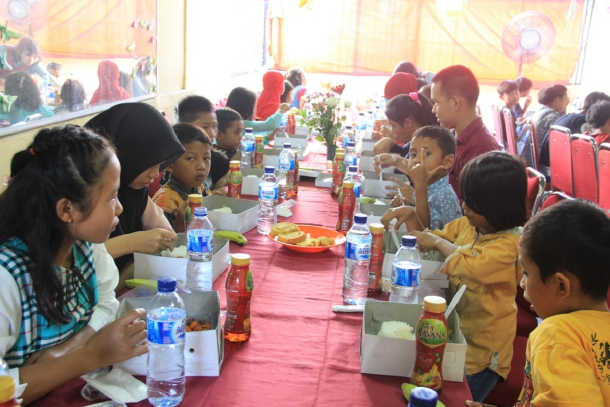 Children attend an Eid al-Fitr lunch organized by the Community of Sant’Egidio in Jakarta in June 2018. The Indonesian Ulema Council has called on Muslims to celebrate Eid at home this year because of Covid-19. (Photo: Konradus Epa/UCA News)

The top Islamic clerical body in Indonesia has issued a fatwa allowing Muslims to conduct Eid al-Fitr prayers at home as part of efforts to curb the spread of Covid-19.

“Eid al-Fitr prayers can be performed at home by Muslims alone or together with family members if they live in an area where the spread of Covid-19 outbreak remains uncontrolled,” the Indonesian Ulema Council (MUI) said in the fatwa issued on May 13.

However, it said “if Muslims live in an area where Covid-19 has already been contained on that day, then Eid al-Fitr prayers can be performed in mosques or other places.”

Calling on Muslims to heed the fatwa, he said: “Never let the virus infect us because we perform Eid al-Fitr prayers. We must protect ourselves from the virus.”

Meanwhile, the government has said social distancing will likely remain in place until at least August.

Government spokesman Achmad Yurianto said the pandemic is expected to have been brought under control by then. “This is when a relaxation of restrictions can be slowly introduced,” he told UCA News.

Social distancing requirements have so far been imposed in four provinces and 22 districts and municipalities. They include staying at home and bans on gatherings and limited public transport.

Praying at places of worship has been suspended, with the Catholic Church livestreaming Masses on the internet or broadcasting them on television.