Melania Mamu, 52, whose husband was detained by police over a land conflict, kneels before members of the local parliament during a protest on Sept. 29. (Photo: Doni Parera)

The wives of 21 farmers detained by police for almost three months following a land dispute in Indonesia's East Nusa Tenggara province staged a protest on Sept. 29 to demand the release of their loved ones.

Families of the farmers claim they are being held illegally and are innocent victims of a conspiracy between local authorities and land grabbers.

The women and other members of the farmers’ families marched on the West Manggarai district police station, where the farmers are being held, as well as to the local prosecutor's office and the local assembly.

The march followed an appeal last week in which the women met Ruteng Diocese officials to seek help.

Police arrested the farmers on July 2 for allegedly working on four hectares of disputed land located in Golo Mori, near the tourist town of Labuan Bajo.

Three of them claim they are the real landowners while the other 18 were farm workers brought in from neighboring Manggarai district to help work the land, which is also claimed by three other people.

They are just workers. We have been waiting three months for their return

The police have accused the farmers of disturbing public order, which carries a maximum 10-year prison term.

However, the women said the police acted arbitrarily in arresting their husbands who were exercising a legal right to work the land. They also said the men were being held illegally since they were still in police custody beyond the maximum 60 days stipulated by law.

“They are just workers. We have been waiting three months for their return,” said Melania Mamu, one of the wives.

A photo showing Mamu kneeling before local MPs has gone viral on social media and sparked concern from activists who joined the call for authorities to listen to them. 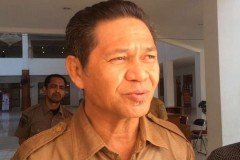 Doni Parera, a local activist, told UCA News that the farmers’ detention had clearly exceeded the limit stipulated in the criminal code.

He said the police excuse that the investigation has not been completed does not hold water. "Police are just doing what they want," he said on Sept. 30.

He said confirmation by the prosecutor that this case could not be processed further because case files submitted by the police were incomplete is no excuse for detaining them further.

Police spokeswoman Eliana Papote did not answer questions on the alleged irregularities surrounding the farmers’ case.

He said one farmer who had been a rival claimant said he had sold some of the disputed land to a police officer, who then sold it to a company. "The company’s owner has confirmed the police connection,” he said.