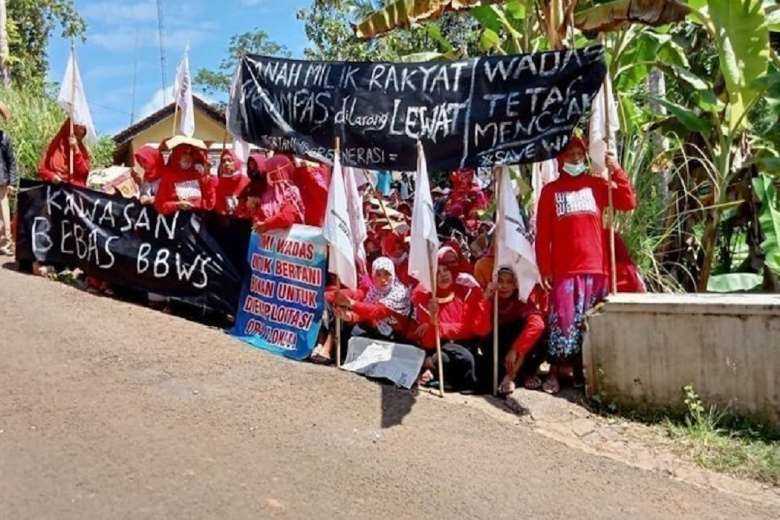 Indonesian rights groups have called for the release of dozens of farmers and activists, they say were wrongfully arrested on Feb. 8 for protesting against a mining project in West Java province.

At least 64 people were rounded up and taken away when police moved in to break up a peaceful protest against a proposed quarry near Wadas, a village in Purworejo district, according to Yogyakarta-based the Legal Aid Foundation.

Many of those arrested were beaten before being led away, the foundation added.

Hundreds of police had been deployed to the village to protect government surveyors sent to examine the area.

Villagers say the proposed quarry poses a threat to the environment, water sources, and their way of life.

A police spokesman said officers moved in because some of the villagers were armed with sharp weapons.

But villagers denied police allegations and claimed scuffles broke out because of the police action.

Amnesty International Indonesia and the National Commission of Human Rights also condemned what they said was excessive use of force by police and demanded the release of the protesters.

“Wadas residents have the right to give or withhold, their free, prior and informed consent to mining plans in their area. They also have the right to express it peacefully," Amnesty International said in response to the arrests.

“The steps taken by the police officers who made arrests without clear reasons have violated the constitutional rights of the citizens, as well as violated international norms,” the group said.

Beka Ulung Hapsara of the National Human Rights Commission said it was concerned about the alleged police tactics.

He called on Purworejo district police to release all those still being held.

Meanwhile, the Nature Lover Movement in Wadas Village, a local people group, urged the government to stop the project.