A district chief in Indonesia’s West Kalimantan province has enraged rights activists by ordering the demolition of an Ahmadi mosque that was attacked and damaged by hardline Muslims last year.

They say the move is yet another attack on religious freedom in Indonesia and against the Ahmadi community, which has often suffered attacks from mainstream Muslims who accuse them of heresy.

Jarot Winarno, head of Sintang district, ordered the Ahmadiyya community in Balai Harapan to demolish the Miftahul Huda Mosque last week in a letter seen by UCA News on Jan. 14.

The order comes a few months after the mosque was attacked last September and just days after the perpetrators were jailed for four months for the attacks.

Winaro said the mosque had no permit and was an "unlicensed building functioning as a house of worship."

He said the demolition order took into account "community peace and order as well as the local community's opposition."

The government needs to ensure that there is no room for intolerant groups. Allowing them space is the same as allowing the seeds of extremism to grow in Indonesia

He gave the Ahmadi minority group 14 days to demolish the mosque. "If the demolition is not carried out within that period, then it will be carried out by the Sintang district government," he wrote.

Activists from the Advocacy Team for Freedom of Religion and Belief called the order a blatant act of discrimination against the Ahmadi community to satisfy intolerant groups.

“One must question the motives of a district head who cited the house of worship not having a building permit since all other houses of worship in the area don’t have one either,” it said on Jan. 14

Moreover, they said, the deadline given to the Ahmadi to demolish the mosque coincides with the Jan. 22 release of those who attacked it. The attackers are due for release after having spent time in custody on remand. 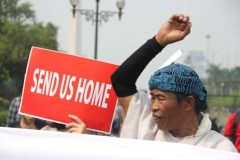 The activists voiced concern the Ahmadi community would be attacked again given that the mosque attackers made threats against it during their trial.

They also said banners with messages attacking the community “just like ones that appeared before the mosque attack in September” have appeared in the locality again.

"The government needs to ensure that there is no room for intolerant groups. Allowing them space is the same as allowing the seeds of extremism to grow in Indonesia," they said.

Ordering places of worship to close because of permit issues that appear because of hardline opposition to them has long plagued religious minorities in Indonesia.

In Bogor, West Java province, the Indonesian Christian Church Congregation (GKI Yasmin) has been fighting for 15 years to build a church in the location they want after winning a Supreme Court case. This is despite having legal documentation.

In 2015, eight Protestant and one Catholic Church in Aceh Singkil district of Aceh province, the only province in Indonesia that has implemented Sharia law, were demolished after the district chief claimed an agreement struck between local Muslims and Christian settlers in 1980 meant that only one church would be allowed in the district.

ABDUL AZIZ
Pretty soon . there will be no freedom for the the intolerants also. God is just. He grants time to prpetraitors of injustice but then punishes them for their nefarious deeds.
Reply