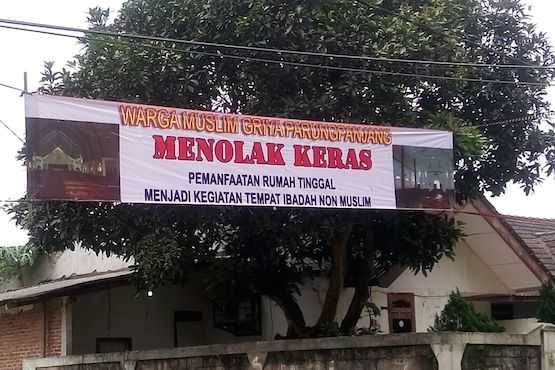 The churches were the Methodist Church Indonesia, Huria Batak Protestant Church and Catholics, who were using a house for catechism.

Bogor district chief, Nurhayanti told media that the churches were banned from holding services because the government cannot guarantee their safety.

The move follows what church representatives said were acts of intimidation last week in which a radical Muslim group called Group 11 staged marches demanding the churches and the house be closed.

Reverend Abdi Saragih of the Methodist Church said his church is legal and has been listed at the Religious Affair Ministry.

However, the congregation has been facing intimidation since 2014, he said.

According to Saragih, they have met all building permit requirements but the authorities had yet to issue one.

"We are struggling for our right to worship," he told ucanews.com.

Complaints have been sent to President Joko Widodo and parliament, he added. Alex A. Makawangkel, chairman of the St. John the Baptist parish council, told a similar story.

However, it is not the church that’s been targeted but a house used for catechism and Sunday school for students unable to learn Catholicism in their schools.

"Local Muslims think it is a church," he said.

Bonar Tigor Naipospos, deputy chairman of rights group Setara Institute for Democracy and Peace, said the government needs to use a special approach with West Java because it has seen a spike in acts of intolerance over the last 10 years involving radical groups and even the local government.

According to the institute, West Java has the highest incidents of religious intolerance, with 41 cases reported last year.