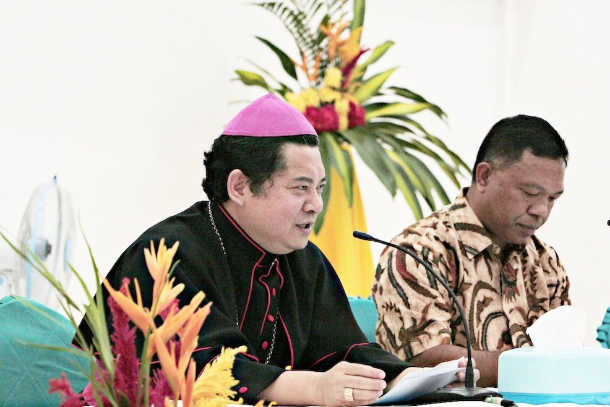 Four dioceses in Indonesia’s Catholic majority East Nusa Tenggara province have formed a special team to improve education quality in a region that has consistently come near the bottom of national performance league tables over the past decade.

The agreement was struck at a June 20-22 meeting in Labuan Bajo, in West Manggarai district involving 120 priests, nuns, brothers and laypeople, as well as representatives from education offices in nine districts in the region.

"The working team … will control the implementation of programs to improve standards among school managers, principals and teachers in each diocese," Franciscan Father Vinsensius Darmin Mbula, chairman of the National Council of Catholic Education said June 22.

He said the conference was the starting point where Catholic educators “will move forward together and instigate reform."

There has been a decline in the quality of Catholic schools since European missionaries handed over control to diocesan priests and lay people.

Father Mbula said that it is indeed a struggle for the Catholic Church to improve the quality of its schools, particularly in East Nusa Tenggara.

The province’s human development index has seen East Nusa Tenggara regularly languishing in 32nd out of 34 provinces, just above Papua and West Papua, which are also Christian majority areas.

Bishop Silvester San, Apostolic Administrator of Ruteng Diocese called on school managers not to dwell on the situation, but take steps to improve standards.

"Whatever the situation, we must be prepared for the challenges," he said.

Rofinus Endi, a high-school administrator in Ruteng, in Manggarai district called on Catholic schools to unite and help each other achieve better standards and results.

"The schools tend to be too independent and don’t share ideas,” he said.

The gathering called on the government to come up with more initiatives to boost Catholic schools, such as providing better funding, equipment and better teachers

Recommendations made at the gathering will be submitted to the four bishops running each diocese, district and provincial governments and the education ministry.

Bernard Keda, who heads the education department of East Flores district, agreed that more support needs to come for Catholic schools from government at local and national level as the Church plays an important and inseparable role in the development of the region.

"If the Church and the government work together, there is hope for change," he said.