Atambua Diocese in Indonesia’s East Nusa Tenggara province has denied accusations made by an award-winning writer that it failed to act properly against a priest he says was having intimate relationships with women.

Father Paulus Nahak, chairman of the diocese's Justice and Peace Commission, said the writer’s accusation was unfounded.“Bishop [Dominikus Saku] of Atambua, after learning of the priest’s behavior, immediately took steps under provisions set out by canon law," he said in a statement on July 8.
Subscribe to your daily free newsletter from UCA News
Thank you. You are now signed up to Daily newsletter
The statement followed the arrest of writer Felix Nesi for vandalizing a priests' home at Bitauni Vocational School in the province’s North Central Timor district on July 3.

Nesi broke several windows and chairs to protest against the transfer of the errant priest to the school from his parish after the scandal broke. He believed the transfer was effectively a slap on the wrist for the priest and irresponsible as the school had a large number of female students.

While in police custody, Nesi wrote about the scandal and his thoughts about the diocese's response in a Facebook post that went viral.

Father Nahak said the case of the accused priest was resolved according to customary and church law and the priest had been suspended from pastoral duties since October last year.He said the priest was assigned to the school "in the context of self-cultivation while awaiting the opportunity for a spiritual refresher course.”He said legal proceedings against Nesi for criminal damage "could be solved amicably, with the principle of openness to reveal the truth to achieve justice and peace.""We sincerely hope that all comments, opinions and analysis [of the case] can be expressed proportionally based on facts," he said.
Related News 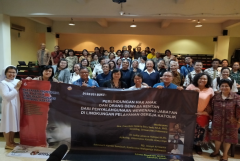 Nesi, however, insisted on sticking to his guns, saying he would not stop speaking out about the priest, who was only identified as “Father A,” despite the threat of criminal punishment.He said he had received a lot of information about the priest that revealed he had been involved with at least two women, he said.He also claimed to have dirt on other priests in the diocese who were only shunted from one place to another rather than punished more appropriately."I am committed to exposing all of them," said Nesi, who won a Jakarta Arts Council award in 2018 with his novel Orang-orang Oetimu (People of the Oetimu).The novel tells of priests who like to protect fellow priests with problems or cover up their wrongdoings.
Support our Catholic journalism with a contribution of any size
Your contribution will help the Catholic journalists and editors in UCA News to report news, features, commentaries, video stories and podcasts on issues affecting the lives of millions of Catholics around the world.
Here is a gift of two valuable books as a token of appreciation to you.
Check your mailbox for links to these PDF/e-Books.