Catholic fashion designer Siane 'Anne' Avantie and her team are making personal protective equipment to be distributed for free to hospitals in Indonesia. (Photo supplied)

With many medical workers in hospitals across Indonesia lacking personal protective equipment, forcing some to wear disposable plastic raincoats while tackling the Covid-19 pandemic, Siane “Anne” Avantie decided to come to their rescue.

Avantie, 53, a renowned Catholic fashion designer from Semarang in Central Java, is best known for making clothes for rich and famous women.

But the last few weeks have seen her and the Anne Avantie Foundation she established 18 years ago producing protective gear free of charge to help medical workers on the front line to fight the virus.

She felt compelled to do so after many became infected and dozens died after treating Covid-19 patients without proper protective gear.

As of April 12, at least 30 doctors and nurses had died, while more than 160 others have been infected.

"God has moved me to do something for our heroes who risk their lives for others,” Avantie told UCA News. “I responded to this situation by creating protective gear.”

Avantie, a philanthropist who has established several foundations including the Wisma Kasih Bunda Foundation for children with disabilities, said that although she doesn’t have the same resources as major garment producers, it does not prevent her from trying to address the desperate need to provide protective gear for those putting themselves in harm’s way in hospitals across the country.

“This protective gear is given free [to hospitals] because my motivation is to protect medical workers,” said Avantie, the mother of three children.

Producing such gear is a new experience but if healthcare workers cannot serve patients because of a shortage of protection, it will mean more victims, she said.

Avantie said she was encouraged to take up the cause by a hospital manager, Franciscan Sister Victorine Ida Nursanto, executive director of the Elisabeth Hospital in Semarang, Central Java. 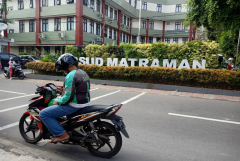 She said Sister Nursanto came to her home and brought samples of the protective gear used by doctors and nurses and asked her if she could produce them for the hospital.

So far, she has been approached by at least 400 hospitals across Indonesia looking for protective equipment.

“The amount we produce is small. But I hope it will inspire other designers, tailors or garment companies to help fulfill the shortage," she said.

Besides protective gear, Avantie is also making face masks in cooperation with female prisoners in Semarang.

To get what she produces to those who need it, Avantie relies on a local courier company, Jalur Nugraha Ekakurir .

Wahyu Sangerti Alam, the courier's branch manager in Semarang, said he and his company were compelled to help Avantie after seeing a social media campaign seeking more protective equipment.

“Anne Avantie is a sincere person who like many Indonesians wants to play a part in fighting Covid-19,” said Alam. “We also want to participate in the struggle by distributing what society needs.”

Dr. Felix Gunawan, director of the Association of Voluntary Health Services of Indonesia, which includes Catholic hospitals, said quite a few of these hospitals have ordered equipment made by Avantie.

“We really appreciate her efforts to protect medical workers, to protect us from the virus,” he told UCA News, adding that Avantie’s efforts have been very helpful for hospitals in need.

More and more people are being inspired by her actions, said the doctor.

Dozens of doctors have died because they were unaware that patients they were treating had been infected with Covid-19. “They were not prepared or protected. Many did not use protective gear because it was unavailable,” Gunawan said.