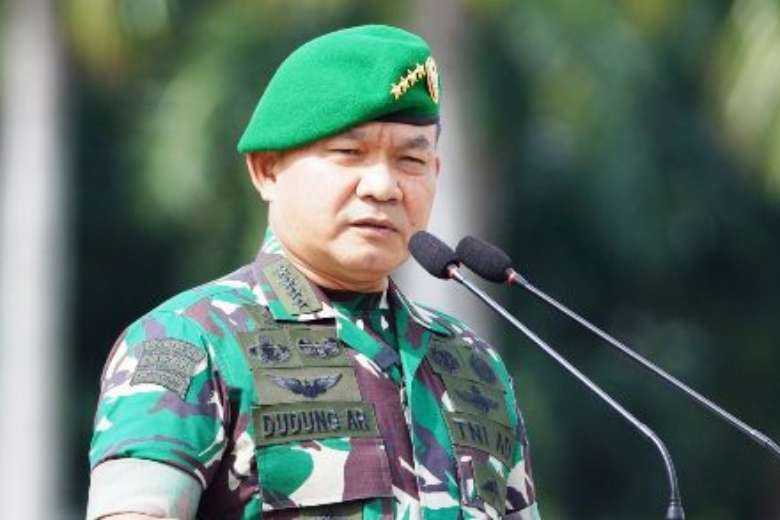 General Dudung Abdurachman has been accused of blasphemy for saying God isn't an Arab. (Photo: tniad.mil.id)

A top Indonesian general says controversial comments he made about God that enraged Muslim groups were aimed at upholding diversity and defending religious minorities such as Christians from intolerance.

Army Chief of Staff General Dudung Abdurachman may find himself facing a blasphemy charge after a coalition of clerics reported him to the Army Military Police Command for his statement that God is not an Arab.

Abdurachman responded to the reports by quoting a statement from Muhammad Luthfi bin Ali Yahya, a moderate Muslim cleric and presidential advisory council member of Arab descent: “Don’t give an opportunity to the intolerant group and we must commit to Pancasila (five founding principles), the constitution, the Unitary State of the Republic of Indonesia (NKRI) and Unity in Diversity.”

“Indonesia was built from diversity and difference [of opinion]. We should respect it because it becomes our strength,” he said on Jan. 29 at a book launch in Jakarta.

He further said that it would be dangerous if an intolerant group was allowed in Indonesia.

Petrus Selestinus, a Catholic layman and chairman of a lawyers’ group, said the coalition reporting the statement is OK because it has the right to do so under the constitution but the case isn’t blasphemy.

If I prayed, I prayed simply … and I only used the Indonesian language because our God isn’t an Arab

“According to me, Dudung Abdurachman’s statement doesn’t have criminal or blasphemy aspects,” he told UCA News on Jan. 31.

The general’s statement was reported by the Coalition of Indonesian Muslim Clerics, Habib and Lawyers of Anti-Blasphemy on Jan. 28.

“If I prayed, I prayed simply … and I only used the Indonesian language because our God isn’t an Arab,” Abdurachman says in the video.

Damai Hari Lubis, coordinator of the coalition, said in his statement on Jan. 30 that it reported Abdurachman on Jan. 28 and the report was received by Agus Prasetyo from the Army Military Police Command.

The coalition is hoping legal action will be initiated against the army general so as to prevent further cases of blasphemy and hate speech.