Rohingya men sleep on a pile of donated clothes on Sept. 8 at a transit camp after nearly 300 Rohingya migrants came ashore on the beach in Lhokseumawe on the northern coast of Indonesia's Sumatra island. (Photo: Rahmat Mirza/AFP)

Authorities in the Indonesian city of Lhokseumawe have urged the United Nations’ refugee agency to speed up efforts to relocate hundreds of Rohingya migrants who came ashore there, saying they do not have the means to look after them.

At least 500 Rohingya are staying in Lhokseumawe, the second-largest city in the semi-autonomous province of Aceh on Sumatra island.

They ended up there after making hazardous sea voyages to escape oppression in Myanmar’s Rakhine state and overcrowding in Bangladeshi refugee camps.

Some 293 of them came ashore last week and are being sheltered at the Lhokseumawe City Training Center after having endured seven months of terror at sea.

According to city officials, the United Nations High Commissioner for Refugees (UNHCR) is dragging its heels, having not yet found a third country to accept the ones who arrived previously.

In the meantime, the city says it is struggling to cope with the influx, prompting authorities to urge the UN agency to speed up efforts to relocate them.  They also want the agency to shoulder the burden of looking after them while these efforts are ongoing.

According to Ridwan Jalil, head of Lhokseumawe’s Social Bureau, the local government is having difficulty helping, particularly regarding healthcare amid the coronavirus outbreak.

“As an international organization, the UNHCR has the responsibility to handle Rohingya refugees regarding accommodation and health,” he said.

UNHCR spokesman Mitra Suryono said the agency had distributed humanitarian aid to them and other Rohingya refugees in Lhokseumawe and was prioritizing their health and security.

“We thank the local government and people for helping the refugees,” he said.
Related News 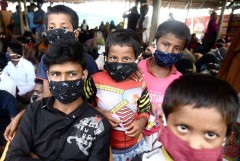 Meanwhile, Amnesty International Indonesia has urged the government to appeal to other ASEAN countries for help in handling the migrants.

According to Amnesty and the UNHCR, about 30 Rohingya on the seven-month voyage to Lhokseumawe died en route and their bodies were thrown into the sea.

“A slow response by ASEAN leaders will see the ocean turn into a mass grave for Rohingya refugees,” Amnesty International Indonesia director Usman Hamid said in a statement.

He also called on Indonesia to “work with the UNHCR to ensure the refugees are looked after.”

Gading Gumilang from the Jesuit Refugees Service (JRS) in Indonesia said handling the refugees requires coordination from the government, civil society and international community, which requires the sharing of resources.

He said the local government in Aceh offered temporary accommodation “because most of the refugees were women and children, many of whom were sick and traumatized.”

“The main focus is a joint effort to fulfill their basic needs and look for joint solutions in the long term,” he said.

Agreeing with Amnesty’s Hamid, she said it is important that ASEAN members share the responsibility in handling the refugee problem.