Migrants from Sri Lanka remain on their boat despite their vessel being washed ashore on the west coast of Lhoknga in Aceh Besar, in Indonesia's Aceh province June 14, 2016. Politicians and business people have pledged to implement measures to end modern slavery, human trafficking at a recent gathering in Pert, Australia. (Photo by Chaideer Mahyuddin/AFP)

Indonesian churches have welcomed recent commitments made by politicians and business people from 48 countries to end modern slavery.

The commitments, that included promoting ethical business practices, were made at the Bali Process Forum held in Perth, Australia on Aug. 24-25.

The annual forum aims to build up cooperation between governments and businesses in dealing with modern slavery.

At this year's gathering countries in the Indo-Pacific region were called upon to adopt a "Modern Slavery Act" to end human trafficking, forced labor and modern slavery in the Asia Pacific region.

Companies were asked to implement transparent and mandatory reporting requirements that would force firms to detail efforts in eradicating modern slavery from their supply chains.

"We appreciate the forum's effort to end modern slavery," Divine Word Father Frans Sani Lake, coordinator of the Justice, Peace and Integrity of Creation in Kalimantan, told ucanews.com on Aug. 29.

The issues of modern slavery and human trafficking are seen as major problems in Indonesia and other parts of the region.

According to the Global Slavery Index, some 45 million people were victims of modern slavery in 2016. Indonesia accounted for 736,100 of them and was one of the 10 worst countries where this crime takes place.

The commitments made at the Perth forum are important to counter greedy individuals and institutions that solely aim to gain a lot of money through human trafficking, Father Lake said.

Another forum commitment included finding solutions to the cause of human trafficking and slavery. 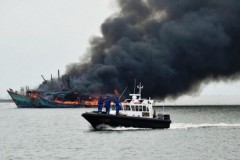 Reverend Jeirry Sumampow, spokesperson of Communion of Churches in Indonesia also welcomed the commitments and called for the Indonesian government to adopt anti-modern slavery laws in light of the problem the country has with this and related crimes.