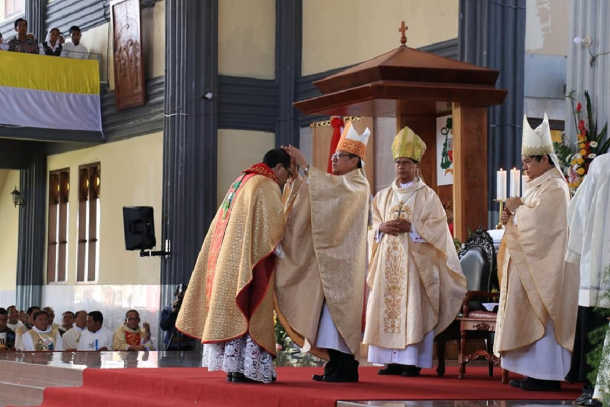 The Indonesian Church has been accused of flouting a ban on mass gatherings and endangering hundreds of people’s lives by going ahead with the ordination of Bishop Siprianus Hormat of Ruteng amid the growing coronavirus crisis.

His ordination at the Assumption of Mary Cathedral Church in Ruteng, East Nusa Tenggara province, on March 19 was attended by 32 bishops, hundreds of priests and around 1,000 Catholics, both from the diocese and from across the country.

The move was condemned on social media, with the Church being accused of flouting a government ban on mass gatherings and ignoring an appeal by the head of the national Covid-19 task force, Doni Monardo, to postpone the ceremony.

The appeal was made to Cardinal Ignatius Suharyo Hardjoatmodjo, chairman of the Indonesian Bishops' Conference, who also presided over the ceremony.

In his text message which went viral, Monardo reminded the cardinal that the event could spread the virus.

"Victims of Covid-19 continue to fall. The spread is not from the person being treated in hospital but by healthy people who go around carrying the virus,” Monardo wrote.

Minister of Communication and Information Johnny Plate, a Catholic who traveled to Ruteng for the ordination, immediately returned to Jakarta when he saw the message.

Bishop Silvester San, apostolic administrator of Ruteng, said it was impossible to cancel an event that had been planned well in advance.

"We did not receive any letter [from the government] but only an appeal. We could not cancel it, but we have tried to obey protocols set by the government," he told reporters after the Mass.

Before the ceremony, organizers applied Covid-19 protocols such as testing the body temperature of those attending, providing hand sanitizers and barring sick people from the event. The body temperatures of bishops, priests and Catholics attending the ordination are checked ahead of the ceremony on Catholic-majority Flores island. (Photo: Camillian Father Cyrelus Suparman Andi)

Diocese secretary Father Agustinus Manfred Habur told UCA News that the Church did not cancel the ordination because the appeal to do so was received only a few hours before it was due to start.

“We could only cancel additional events,” the priest said, referring to a concert that was scheduled to take place after the ordination.

Father Edigius Menori, who participated in the ordination, said he was worried about the coronavirus but the Mass was also important. "They were equally important,” he told UCA News.

Some dioceses, including Jakarta Archdiocese, have canceled Masses and other liturgical activities for 15 days from March 20 to April 3.

"Daily and weekly Masses will be broadcast online,” a letter from Jakarta Archdiocese said.

Schools in many regions across Indonesia have been closed for two weeks, with the possibility of this period being extended.

As of March 19, the number of coronavirus cases in Indonesia had risen to 309, with 25 deaths.