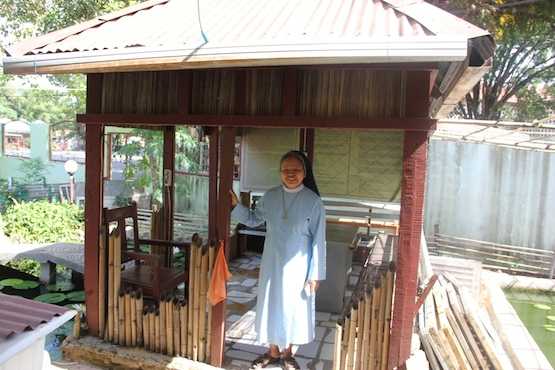 Holy Spirit Sister Sesilia Ketut stands at a shelter in front of her office where she uses it to give counseling to victims of domestic violence in Atambua, East Nusa Tenggara province. (ucanews.com photo)

The Catholic Church in Indonesia has joined a government-sponsored awareness campaign to combat human trafficking as well as violence against women and children.

A third central aim is to promote economic justice throughout the sprawling archipelago.

The campaign, entitled the "3 Ends," commenced in March 2016 in provincial capitals.

Yohana Yembise, Minister of Female Empowerment and Child Protection, said on Aug. 26 that some 24 million Indonesian women face psychological and physical abuse as well as sexual violence or exploitation.

Rianti, 36, one of the millions of women who have been victims of violence, welcomed the campaign.

However, she believed that it should be conducted at the neighborhood level so that people learn about rights and obligations, in particular that husbands should not act violently towards their wives and children.

Rianti said she had often been beaten by her husband, for example over the performance of household tasks such as cooking and washing clothes.

"I was ashamed because he hit me in front of my children and neighbors," she told ucanews.com.

Her neighbors did not bother to help her when she was being abused.

However, eventually she had the courage to leave and seek a divorce.

Holy Spirit Sister Sesilia Ketut, chairwoman of Forum for Women and Children in Atambua, West Timor, said many women in this region of Indonesia are treated violently by their husbands or brothers.

"Every day we receive reports of at least four women being abused," Sister Ketut said.

"They are hit by their husbands, raped, and abandoned."

Together with other members of the forum, she provides training to families on the importance of preventing domestic violence.

There was a campaign awareness event in Kupang, West Timor, the capital of East Nusa Tenggara Province, on Aug. 15.

However, Sister Ketut is calling for the campaign to also reach outlying districts where many abusers live.

Ursuline Sister Irena Handayani, of the migrant care division of the Jakarta Archdiocese Justice and Peace Commission, welcomed the government bid to combat violence against women.

She said one problem was that many families were too ashamed to make official complaints over abusive and violent behavior.

Dominican Sister Natalia Sumarni, who is active on gender issues, said a major effort is needed to protect women and children.

"And it should start in families," the nun told ucanews.com.

She has asked women empowerment desks in archdioceses and dioceses to participate in the '3 Ends' campaign.