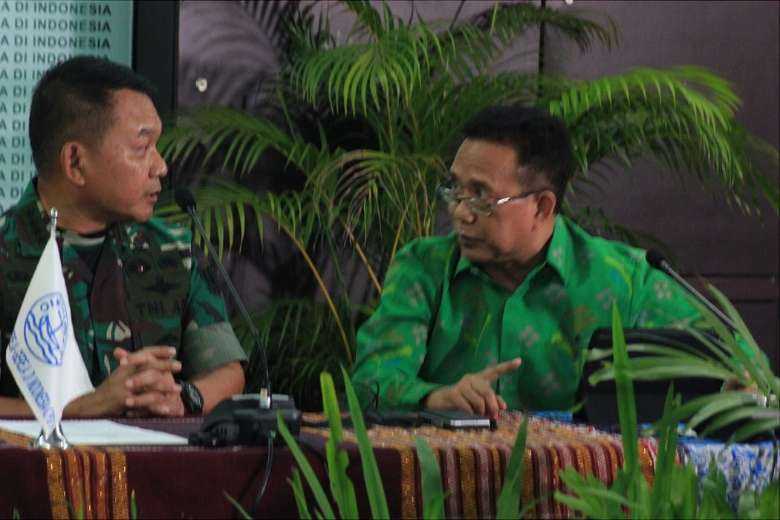 Reverend Gomar Gultom (right), chairman of the Communion of Churches in Indonesia, speaks with army chief of staff General Dudung Abdurachman on May 31 in Jakarta. (Photo supplied)

Christians have urged the Indonesian army to take strict action against any group trying to sow discord and create divisions in society after a video of a large motorcycle rally by Muslim extremists calling for an Islamic caliphate went viral on social media.

The call by Christians came in a May 31 meeting between Communion of Churches in Indonesia (PGI) chairman Reverend Gomar Gultom and the army’s chief of staff General Dudung Abdurachman at the PGI’s offices in Jakarta.

Abdurachman was paying a visit as part of efforts to win the support of religious leaders in dealing with problems causing disunity in society.

In the video, dozens of motorcyclists in green uniforms carried placards with messages that read “Welcome the Awakening of the Islamic Caliphate”. They also distributed leaflets containing extremist content on the streets of Jakarta at the weekend.

The Jakarta video drew condemnation from religious groups including the PGI.

Rev. Gultom said in the meeting with Abdurachman that the Indonesian army needs to take a more prominent role in dealing with groups like the one in the video trying to do away with the national ideology of Pancasila (five principles).

Pancasila is seen by Indonesians as a unifying belief as it encompasses all religions and people. It stipulates belief in one God, a just and civilized society, a united Indonesia, a democracy guided by consensus, and social justice for all.

“We, together with many other Indonesian people, do support you. Regarding the video, some Protestant leaders want me to ask you this: ‘Why can opposition to our national ideology be easily expressed in public?’” Rev. Gultom asked.

“We hope that you can create and maintain unity in this country, a difficult yet noble task.”

Vincentius Hargo Mandirahardjo, chairman of the Association of Indonesian Catholic Intellectuals (ISKA), which promotes religious diversity, said Pancasila must be upheld by all Indonesian people.

“Promoting the idea of an Islamic caliphate is not the direction to go in if you want diversity and respect for all religions,” he told UCA News.

Calls by hardliners for a caliphate have gathered pace in recent years after the Islamic State group declared a caliphate in parts of Iraq and Syria several years ago.

“Any group with such an idea is our common enemy that we must fight against together,” he added.