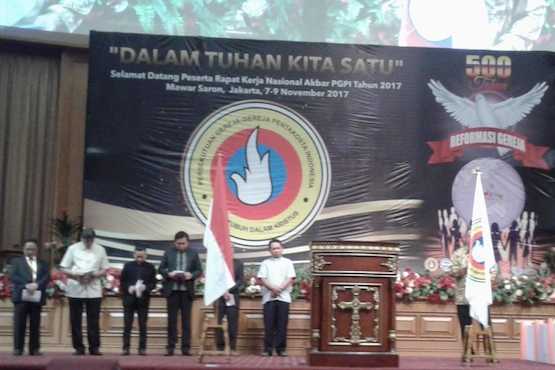 Churches celebrate the 500th anniversary of the Protestant Reformation by holding a prayer for unity and peace in Jakarta on Nov 7. (ucanews.com photo)

More than 700 Protestants and Catholics have stressed the need for Christian unity to ward off what they say is the ever-growing threat of sectarianism in Indonesia.

They also pledged at a joint prayer rally in Jakarta on Nov. 7 to mark the 500th anniversary of the Protestant Reformation to continue to build ties.

"We commit to building unity among churches, because at this time we are hostile to each other, and fail to become Christ's witness," they said in a statement.

They also committed to distancing themselves from fanaticism, hatred and behavior that could harm relations between their churches.

Rev. Jacob Nahuway, chairman of the Communion of Pentecostal Churches in Indonesia, said Christians must stand as one to face big challenges.

"Sometimes we waste our energy and time on what is not important, on problems within our churches, and neglect bigger problems that threaten our existence as Christians," he said, referring to growing fears over religious intolerance in Indonesia.

Churches, he said, must not focus too much on their own problems, but also reach out to people from other religions to build mutual understanding.

Rev. Henriette Hutabarat Lebang, president of the Communion of Churches in Indonesia, called on Christians to stop building walls and fences that separate Christians from each other and other religions.

"Let us commit ourselves to building peace and unity," she said.

Christians make up about 10 percent or about 23-24 million people out of Indonesian 250 million population.