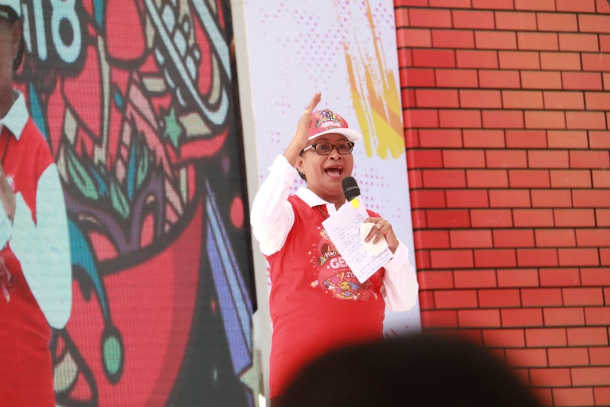 Women Empowerment and Child Protection Minister Yohana Susana Yembise delivers a speech at the National Children's Day celebration on July 23 in East Java province. She stressed the need to protect children in Indonesia from violence and the risk of radicalization. (Photo courtesy of Women Empowerment and Child Protection Ministry)

Terror and religious radicalization have impacted the lives of Indonesian children and more needs to be done to protect them from all forms of violence, a government minister has said.

The comments from Women Empowerment and Child Protection Minister Yohana Susana Yembise come in the wake of an Indonesian family suicide bombing in May that killed more than a dozen people.

In a speech at a National Children's Day celebration on July 23 in Pasuruan district of East Java province, Yembise named terrorism, as well as sexual violence, drugs and pornography, as key problems impacting children.

She was referring to four children — one as young as 9 — used in the deadly attacks that targeted three churches in the provincial capital of Surabaya.

"I hope that the momentum of the celebration can create an awareness among individuals, parents, families, society, businessmen, civil organizations, mass media, children and both national and regional governments of the importance of their roles, tasks and obligations to protect and to fulfil children's rights," she told more than 3,000 people, including children, who attended the event.

Rapelita Tambunan, who heads the Woman and Child Bureau at the Communion of Protestant Churches in Indonesia, said radicalization among children is a growing concern.

"We have received reports at our meetings that radicalization among children is on the rise after a group of children in Jakarta chanted and demanded a local governor be killed," she told ucanews.com.

Purnama was sentenced to two years in prison for blasphemy after a lengthy trial following mounting pressure from radical groups.

More than 40 percent of young people were ready to execute extremist acts and supported efforts to establish an Islamic caliphate in Indonesia, Rapelita said, quoting a 2015 survey by the Maarif Institute.

"Intolerance has a huge impact on children," she said. "We call on all social elements to create awareness among religious leaders and public figures so as to pay more serious attention to the protection of children and the fulfilment of their rights."

Meanwhile, Franciscan Father Vinsensius Darmin Mbula, chairman of the National Council of Catholic Education, said the radicalization of children could be addressed by encouraging children to be open and to accept differences.

"Intolerance is there among children because they are influenced by people around them, including teachers," he said.