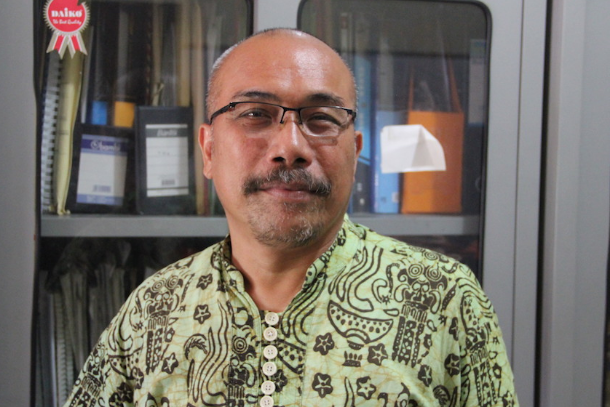 Catholic layman Azas Tigor Nainggolan initiated a smoking ban in an Indonesia Muslim slum along with repainting dwellings in bright colors as part of a bid to improve living conditions. (Photo by Katharina R. Lestari/ucanews.com)

Residents of East Jakarta's Kampung Penas Tanggul slum, located on a former swamp, faced eviction in the early 1990s because of a river clean-up program to mitigate flooding.

It had been illegally inhabited since 1969 by disadvantaged people such as street sellers, poorly paid construction workers and scavengers.

After meeting some of the residents, Azas Tigor Nainggolan, a parishioner from St. Joseph Church in Matraman subdistrict, became their legal adviser. "I cared about their survival," he recalls.

He sought to help make the kampong, the Indonesian word for hamlet or village, neat and beautiful.

So he took a small group from the community to visit a former slum called Kampung Code in Yogyakarta province, also located on a river, that had been transformed into an elegant settlement by the late Father Yusuf Bilyarta Mangunwijaya.

Even though some of the progressive community development ideas were adopted at Kampung Penas Tanggul, the residents continued to face the threat of eviction.

In 2016, Tigor read an article about another slum, Kampung Warna-Warni in East Java province on the Brantas River, that had been given an urban planning makeover.

"I tore out the magazine's page and brought it back to Jakarta for a discussion with my fellows," said Tigor, who has chaired a group called the Jakarta Residents Forum since he founded it in 2000.

"I told them that I wanted to turn Kampung Penas Tanggul into such a clean and beautiful settlement."

In January 2017, he again took a small group of Kampung Penas Tanggul inhabitants to the rejuvenated Kampung Code settlement. 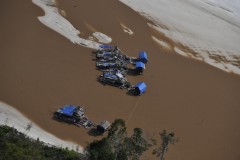 Two months later, residents of Kampung Penas Tanggul began to turn their settlement into Kampung Warna-Warni Tanpa Rokok (Smoke-Free Kampong of Colors) by painting their walls with colorful paints and putting info effect a regulation banning residents from smoking in the kampong.

Tigor said it was the first time that such a slum development undertaking had included a prohibition on tobacco smoking.

He wanted to end the "stigma" that came from poverty-stricken people living in the stench and filth of slum housing, something that Father Mangunwijaya had achieved years earlier.

Since its establishment, the renamed community of Kampung Warna-Warni Tanpa Rokok, now inhabited by 144 Muslim families or 592 individuals, has attracted Indonesian and foreign visitors.

Tigor's initiative earned appreciation from government officials and the National Commission on Tobacco Control, which gave an award to the kampong in 2018.

According to the commission, tobacco consumption in Indonesia has reached shockingly high levels, ranking third after China and India. Worse, 70 percent of all more than 60 million active smokers in Indonesia are classified as being poor.

"That is also the reason why I initiated Kampung Warna-Warni Tanpa Rokok," said Tigor, who is coordinator of the human rights desk at the Catholic bishops' Commission for Justice, Peace and Pastoral for Migrant-Itinerant People.

Thanks to the smoking ban, many residents of the kampong have stopped consuming tobacco, including Joko Sundoko, who has lived there for 25 years and used to smoke five packs of cigarettes a day.

"It was hard at first but I had a strong commitment," said the 40-year-old father of four sons who works as a security officer. "Now I can use the money I used to spend on cigarettes to take my family for a walk on the weekends."

Many Jakarta residents are full of praise for Tigor's efforts to fight eviction threats.

Tigor himself ascribes this advocacy to his religious faith. "Being a Catholic means being a person who can make changes," said Tigor, now 54. "It is very concrete.”