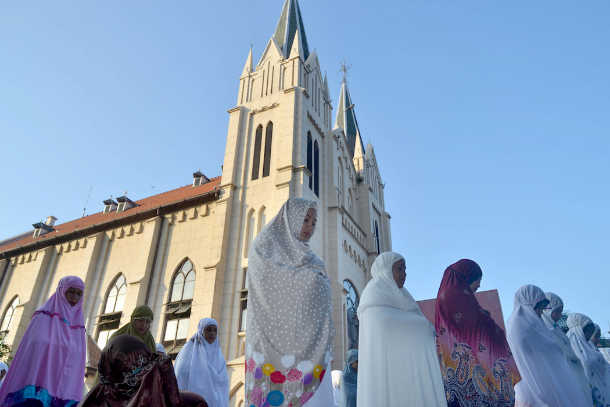 A 2016 file image of a group of Indonesian Muslims offers morning prayers to mark Eid al-Fitr on the grounds of the Hati Kudus Jesus church in Malang, East Java as a show of solidarity and tolerance to the Christian faith. (Photo by Aman Rochman/AFP)

Amanda Setiadi says she often used to feel nervous when interacting with her Muslim colleagues due to fears of religious extremism and violence.

"I always thought they would do something bad to me or behind my back," the 29-year-old Chinese-Indonesian Christian from Kelapa Gading in northern Jakarta told ucanews.com recently. Jakarta has declared 2018 as the "Year of Unity."

With her admittedly limited knowledge of Islam, she tried to convince herself that not all Muslims were closet jihadists, or had in some way been radicalized, by trying to keep an open mind.

Yet her fears would not subside.

She didn't give up, however, and decided to learn more about Islam by reading up on it and watching YouTube videos covering Islamic teachings.

In July she heard of a class being hosted by a group of young Catholic writers and journalists called Agenda 18 that was formed in 2003 to discuss issues like religious plurality. It has held a short program of classes for six of the last 15 years, with the previous one taking place in 2012.

But while the focus in previous years was on writing and literature, it has since expanded to make Islam the main topic. This was in response to the changing situation in Indonesia with extremists now looming so large on the radar.

Setiadi is a catechumen, or a Christian convert who has not yet been baptized. She decided to register for this year's program as classes had been scheduled every Saturday throughout August at a venue in Jakarta Archdiocese.

And Setiadi wasn't alone. About a dozen Catholic laypeople joined her. Each class lasted for four hours.

Stela Anjani, the group's spokeswoman, said the point was to deepen local Catholics' understanding of Islam in a bid to ease misunderstandings and friction due to religion while fostering greater tolerance.

"Cases of violence committed by Muslim groups can create a negative perception about Muslims in general. This ruins inter-religious relations," she said.

For instance, feelings of hatred against Muslims blanketed the hearts of many Christians following a series of suicide bombings that targeted three churches in Surabaya, the capital of East Java province, in May.

One family — a husband, wife and their four children — committed the suicide bombings in the country's second-largest city. Dozens of people were killed and injured.

"We don't want Catholics to be trapped [by thinking all Muslims support this behavior]. We want to create space for mutual understanding," Anjani said.

A message of greeting entitled "Christians and Muslims: From Competition to Collaboration" that was delivered by the Vatican's Pontifical Council for Interreligious Dialogue in June for the feast of Eid al-Fitr, has also strengthened the group's goals.

The message highlights the negative impact of harboring a spirit of competition between Christians and Muslims, and the need for both communities to recall their religious and moral values.

To that end, the August classes that Setiadi attended invited Muslim scholars from organizations that promote religious tolerance and dialogue including the Inklusif Foundation, and covered topics such as Islam and peace.

One of the speakers was Subhi Azhari from the foundation who taught about the caliphate.

"An opportunity like this is very important. These classes really do help us to avoid misunderstandings," he said.

"Friction between religious groups emerges because the faithful don't know each other well," said the priest, a former executive secretary of the bishops' Commission for Ecumenical and Interreligious Affairs.

Thanks to the program, Matheus Kemal Rousdy from St. Laurent Parish in Tangerang, Banten province, says he now has a much clearer picture of what Islam is all about.

"It's convinced me not all Muslims sympathize with those who commit violent acts," said Rousdy, who studies at Multimedia Nusantara University about 35km west of Jakarta.

Setiadi echoed similar sentiments, adding she has finally been able to break free of her misconceptions and fears.

"Classes like this should become regular programs at all parishes and include the values of other religions so we can all get along and understand one another better," she said.