Catholic alumni of the University of Indonesia are holding nine days of prayer for Afghanistan's people.

The Catholic alumni of the University of Indonesia are holding a virtual prayer service for nine consecutive days to pray for peace in Afghanistan in response to Pope Francis’ call delivered late last month.

Calling themselves Alumnika UI, they began the virtual prayer service on Sept. 17 and will end it with a Eucharistic celebration led by their moderator, Jesuit Father Ignatius Swasono, on Sept. 25.

Each daily prayer lasts about 30 minutes and is then followed by a discussion and sharing session that begins at 7pm and is led by eight priests and a nun.

“We are very concerned about what is going on in Afghanistan. We, too, are responding to Pope Francis’ call for prayer and fasting for Afghanistan,” Mathilda A.M.W. Birowo, who heads Alumnika UI, told UCA News.

During his Sunday Angelus address before pilgrims in St. Peter’s Square at the Vatican on Aug. 29, the pope called on Christians around the world to pray and fast to ask God to bring about peace and coexistence in Afghanistan.

The pope was referring to suicide attacks three days earlier at Hamid Karzai International Airport in Kabul, where thousands were trying to get flights out of Afghanistan. At least 169 civilians and 13 US troops died in the blasts.

“Catholics in Indonesia are also celebrating National Bible Month. The theme of this year’s celebration is related to the Covid-19 pandemic and issues of humanity,” Mathilda said.

“We cannot do much [for the people of Afghanistan] as this is a global issue, indeed. But the smallest thing we can do, like the virtual prayer service, is meaningful. I believe in the power of prayer,” Mathilda said.

Referring to the National Bible Month’s theme, Father Swasono told UCA News that through the virtual prayer service “we want to tell all people affected by the Covid-19 pandemic that they are not alone in this tragedy of humanity.”

Alumnika UI’s initiative showed the group’s solidarity with the people in Afghanistan, according to the priest. “We pray for them but the most important thing is that we pray that there will be no more people becoming victims,” he said. 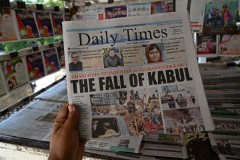 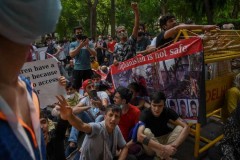