Call for extra vigilance goes out in wake of several attacks on churches, priests 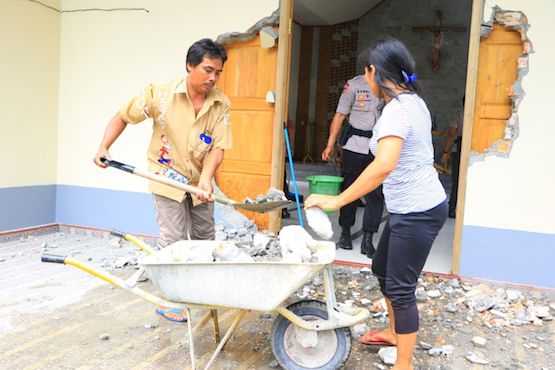 People clear away rubble from the entrance to St. Zachary Chapel in South Sumatra’s Ogan Ilir district after it was vandalized on March 8. (Photo supplied by Sacred Heart of Jesus Father Felix Astono Atmojo)

Church officials have called on Catholics in Indonesia to stay alert in the run up to and during Holy Week following a number of attacks on churches in several parts of the country.

On March 8, six men smashed their way into a chapel in Ogan Ilir district in South Sumatra and burned statues and liturgical ornaments before escaping.

A month earlier on Feb. 11, a man armed with a sword burst in on a Sunday Mass at a church in Yogyakarta’s, Sleman district and attacked a Dutch priest and three parishioners.

"We call on each parish and mission station to stay alert ahead of the observance of Holy Week and Easter. This is very important," Sacred Heart of Jesus Father Felix Astono Atmojo, vicar-general of Palembang Archdiocese in South Sumatra, said on March 13.

"We don’t want the church attack to reoccur," he said.

He also called on Catholics to continue building good relations with people from other religious backgrounds.

"It was sad to see the attack. But we can learn from it, we need to continue to promote togetherness. Let it become our common goal," he said.

"Security in churches must be tightened and cooperation with police and security personnel must be improved," he said.

"But be inclusive, don’t create enemies," he said.

The archbishop said the Immaculate Conception of Mary Cathedral Church formed a 12-member security team following an earlier attack on a priest during Sunday Mass at a church in Medan in August 2016.

Besides attacking the priest with an axe, the teenage attacker also attempted to detonate a bomb in his backpack, which failed to explode.

According to Maria Theresia Erlien, a parishioner from St. Joseph Church in Matraman, East Jakarta the call to be on alert should get serious attention.

Four people were killed in a bomb blast at the church on Christmas Eve in 2000.

"Being vigilant is important despite security personnel usually being deployed [for Holy Week]," she said.