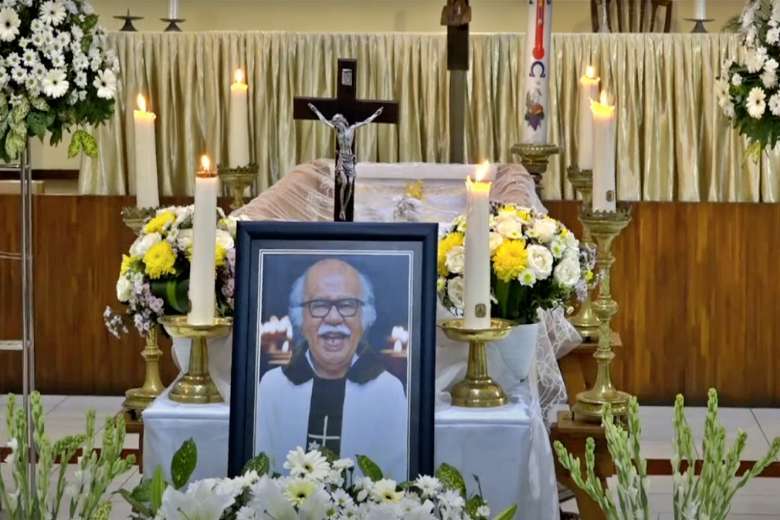 Father Berthold Anton Pareira was widely known as an expert on the Old Testament. (Photo: Screenshot of a livestreamed prayer for Father Pareira’s soul on YouTube)

Catholics in Indonesia are mourning the death of an 81-year-old Carmelite priest who was widely known as an expert on the Old Testament.

Father Berthold Anton Pareira died of a heart attack on Jan. 8 at the Catholic-run Panti Waluya Hospital in Malang, East Java province.He was buried on Jan. 10 at the Sukun Christian Cemetery in the city following a requiem Mass in Our Lady of Mount Carmel Cathedral Church led by Carmelite Bishop Henricus Pidyarto Gunawan of Malang.
Subscribe to your daily free newsletter from UCA News
Thank you. You are now signed up to Daily newsletter

He was “a simple and charming figure who was close to everyone,” said Vincentian Father Fransiskus Xaverius Eko Armada Riyanto, the rector of Widya Sasana School of Philosophy and Theology (STFT Widya Sasana) in Malang, where Father Pareira lectured for many years.

“All his students have been touched, motivated, educated and prayed for by him. Each has inherited his spirit of love and will continue his ideals,” he told UCA News.According to him, Father Pareira taught his students through his exemplary life of prayer instead of words.“His service as a lecturer was a career which ended with love and simplicity instead of luxury,” he said.“Now his love becomes a lantern which will always light up STFT Widya Sasana and our hearts, wherever we are.” Father Pareira was born on June 13, 1939, in Maumere, in predominantly Catholic East Nusa Tenggara province.He joined the Order of Carmelites, the first person from Flores to do so, in 1959 and was ordained a priest in 1966.
Related News After finishing theology and biblical studies at Gregoriana University and at the Pontifical Biblical Institute in Rome, he later earned a doctorate in biblical theology, also from Gregoriana University, where he served as an assistant lecturer of Old Testament studies for three years (1972-75).

Returning to Indonesia, he became a lecturer of Old Testament studies at STFT Widya Sasana in Malang in 1975.

He was later appointed professor of Old Testament studies at STFT Widya Sasana in 2006.

Father Pareira was also a formator for Carmelite seminarians, a member of the order’s Commission for Evangelization and International Commission for Justice and Peace, a counselor for Malang Diocese’s Commission for Ecumenical and Interreligious Affairs, and a member of the Indonesian bishops’ Commission for Theology.
Support our Catholic journalism with a contribution of any size
Your contribution will help the Catholic journalists and editors in UCA News to report news, features, commentaries, video stories and podcasts on issues affecting the lives of millions of Catholics around the world.
Here is a gift of two valuable books as a token of appreciation to you.
Check your mailbox for links to these PDF/e-Books.