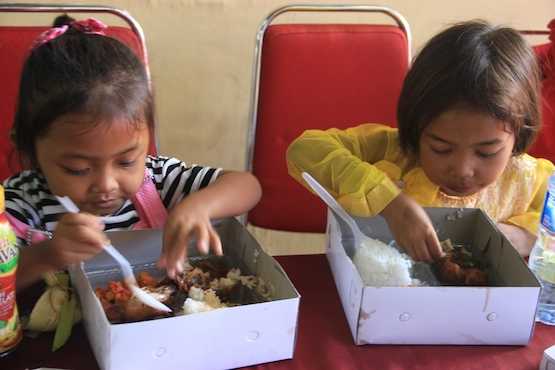 Two children enjoy an Eid al-Fitr lunch provided by the Community of Sant'Egidio on Jun 25 in West Jakarta. (ucanews.com photo)

Indonesian Catholics have made a greater effort than usual to help Muslims celebrate Eid al-Fitr this year amid heightened religious tensions gripping the country.

As a result the Christian community sought to counter intolerance by making a greater effort to foster a spirit of religious brotherhood during the holiday.

Indonesian bishops' conference president Archbishop Ignatius Suharyo of Jakarta issued a video message of goodwill to all the country's Muslim "brothers and sisters," to mark the end of Ramadan holiday.

"We hope that the sacred moment we celebrate will also be a blessing for all Indonesian people and encourage all citizens in building a more just and prosperous Indonesia," he said.

The Indonesian government through the Ministry of Religious Affairs has set June 25 for Eid al-Fitr this year. Indonesia traditionally celebrates Eid al-Fitr over two days.

Many churches across Indonesia located next to mosques — including Jakarta's St. Mary of the Assumption Cathedral — postponed Sunday Mass on June 25 so as not to interfere with Eid prayers.

Catholics — including bishops, priests, nuns and laypeople — also visited and greeted Muslims at mosques and in their homes.

"I hope that interfaith life in the archipelago, especially in Central Java, will be much better in future so that peace and joy can be established," Archbishop Rubiyatmoko said.

Other bishops, such as Bishop Pius Rihana Prapdi of Ketapang in West Kalimantan and Bishop Henricus Pidyarto Gunawan of Malang in East Java, also visited local Muslim leaders to strengthen bonds between them and the local Muslim communities.

In Jakarta, the archdiocese and Community of Sant'Egidio organized an Eid al-Fitr lunch at the Friendship House in West Jakarta for 160 poor Muslims children and their families.

"The poor hardly ever have the chance to sit together for meals. So we invited them so the could sit and eat together," Piere Doe, coordinator of the event said.

According to Eveline Winarko, coordinator of the Community of Sant'Egidio in Indonesia, it was the first lunch organized by the community during Eid al-Fitr.

"We want the event to strengthen a sense of togetherness,"  he said.