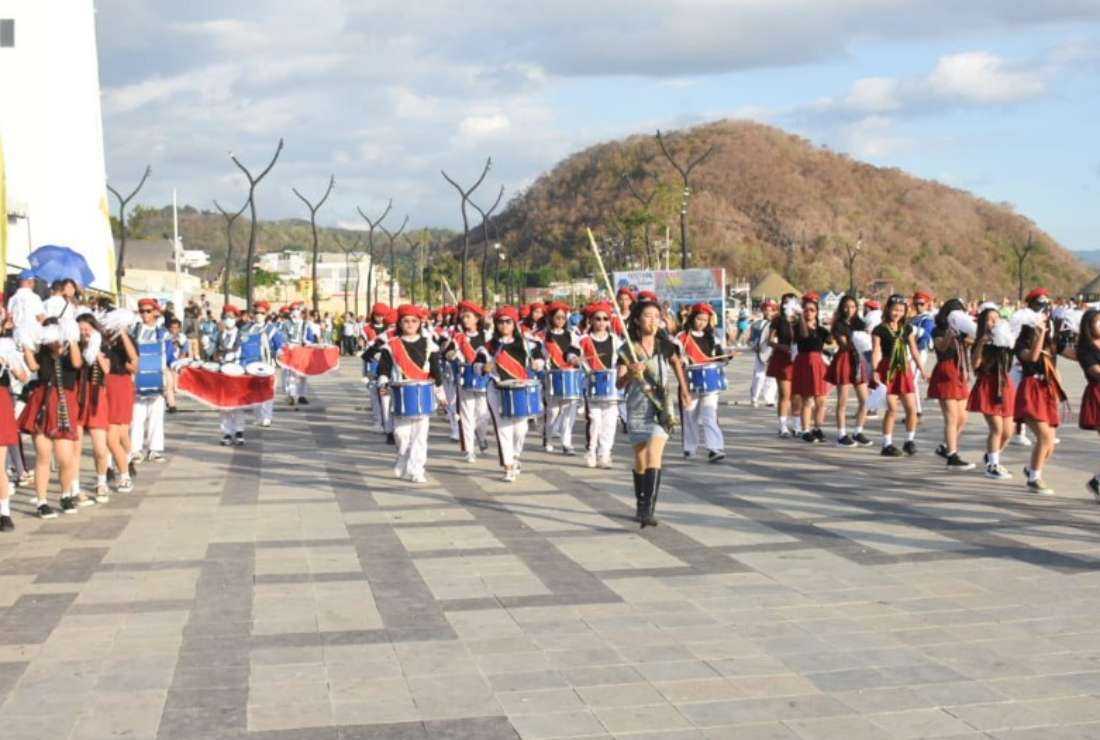 Catholic girls participate in a parade to mark the beginning of a tourism festival in Ruteng diocese on Indonesia's Catholic-majority Flores Island. (Photo supplied)

Ruteng Diocese on Indonesia’s Catholic-majority island of Flores has kicked off a week-long festival involving parishes to promote "holistic tourism" amid an ongoing row over raising the entry fee to the famed Komodo National Park.

The Golo Koe Festival, referring to a hill in the tourism town of Labuan Bajo in West Manggarai district, began on Aug 8 with a traditional teing hang ritual, in which the local ethnic Manggarai tribe, seeks blessings from their ancestors.

As part of the celebrations, Bishop Siprianus Hormat, along with diocesan and government officials, distributed basic food assistance to poor families and people with disabilities.

In a statement, the diocese said the festival was part of an effort to fight for "holistic tourism, a model of participatory, cultured and sustainable tourism." “This festival aims to foster tourism that is rooted and grows in the uniqueness and richness of the local culture and spirituality. This festival also intends to encourage and activate all creative economic activities of the community in improving their welfare," it said.

The festival was organized in collaboration with the West Manggarai district government, the Implementing Agency for the Tourism Authority of Labuan Bajo — Flores and other tourism stakeholders.

"The Church wants to invite all people to become actors, as well as tourism lovers"

Major festival activities include culinary exhibitions involving 180 small and medium businesses, art performances, seminars and discussions, bamboo and mangrove planting in watersheds and coastal areas as well as the cleaning of the environment.

On Aug. 14 a grand procession of Our Lady of Assumption is to be held on land and at sea in Labuan Bajo and on Aug. 15 Bishop Hormat will celebrate a Mass with hundreds of priests in Waterfront City, Labuan Bajo. Father Inosensius Sutam, the diocese’s culture and tourism commission chief, said that through the festival the Church wants to invite all people to become actors, as well as tourism lovers in Labuan Bajo, a city that has been designated as a super-priority tourist destination by the central government. "We are invited to become actors and connoisseurs of tourism. If people from far away can enjoy the ‘big cake’ [of tourism] here, why do people here in front of this big cake die," the priest said, referring to many people having to live in poverty in the region as they are unable to benefit from tourism. The festival is being held despite the chaos gripping the district since last week over the government's decision to raise the fee of entry tickets to Komodo National Park from US$10 per person to $250, for domestic and international tourists. Online ticket sales are controlled by the provincial state company, PT Flobamor. Tourism operators in the Catholic-majority island strongly oppose the policy and started a month-long strike on Aug. 1. However, the strike was called off on Aug. 3 after clashes with police left at least six injured and 42 arrested.

On Aug. 8, Tourism and Creative Economy Minister, Sandiaga Salahuddin Uno, announced the new ticket policy had been postponed based on the advice of President Joko Widodo, and would be implemented next year following dialogue with tourism actors.

Doni Parera, a Catholic and tourism operator, criticized the Church authority for cozying up to the government while local people face a threat to their livelihood from tourism.

"On the other hand, the Church is silent about a serious problem that is currently threatening tourism here, such as the threat of a monopoly of the tourism business by big companies, then marginalizing local residents," he said. “When its people are beaten, where is the Church? I don't hear that they are critical of unfair policies. Because the theme being promoted in this festival is holistic tourism, the Church should also look at tourism issues holistically, namely by addressing issues that threaten tourism," he said.

Responding to the criticism, Father Sutam said the diocese issued a statement on July 27 that said the policy to raise ticket prices was “not appropriate” in the midst of economic recovery from the Covid-19 pandemic.

The priest didn’t comment on the Church’s silence on issues, including a police crackdown on protesters opposing the ticket policy.