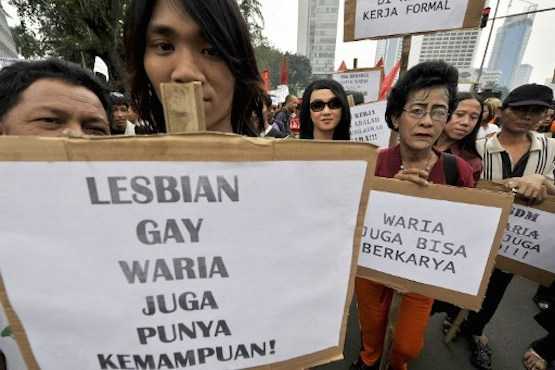 LGBT people display placards reading "Lesbian, gay have skills too" as they take part in a demonstration to mark May Day in Jakarta in this 2008 file photo. (Photo by Jewel Samad/AFP)

Muhammad Nasir told reporters Jan. 23 after inaugurating a new campus of a university in Semarang in Central Java that LGBT people could destroy the country’s moral values, which need to be upheld by the university system.

Nasir was speaking in response to pamphlets distributed by the Support Group and Resource Center on Sexuality Studies at the state-run University of Indonesia.

"The minister distinguished between a psychosexual condition and sexual praxis as something against moral values," Franciscan Father Peter C. Aman, a professor of moral theology at the Jakarta-based Driyarkara School of Philosophy, told ucanews.com on Jan. 25.

Catholic universities had a moral obligation to oppose the minister’s remarks: "The church must defend the community (in this case)," he said.

Matheus Beny Mite, who heads the Catholic education desk of the Jakarta-based Atma Jaya Catholic University of Indonesia, said that the university would not comply with the minister’s remarks "if they are against human rights."

According to Natalius Pigai from the National Commission on Human Rights, the state must promote an education system that was inclusive instead discriminating against the LGBT community.

"The state must guarantee the right of every citizen including members of the [LGBT] community," he told ucanews.com.

Meanwhile, Teguh Iman Affandi, from the LGBT advocacy organization Our Voice, sharply criticized the minister for failing to understand about the LGBT community.

"As a leader of higher education, the minister should understand the scientific study of sexuality," he said.

Following the minister’s remarks, an online petition on change.org that calls on Nasir to renounce his remarks has garnered 1,350 signatures. 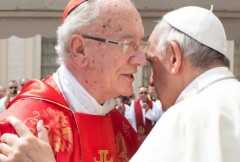