More than 8,000 are taking refuge in shelters after floods and landslides killed at least 128 on Easter Sunday 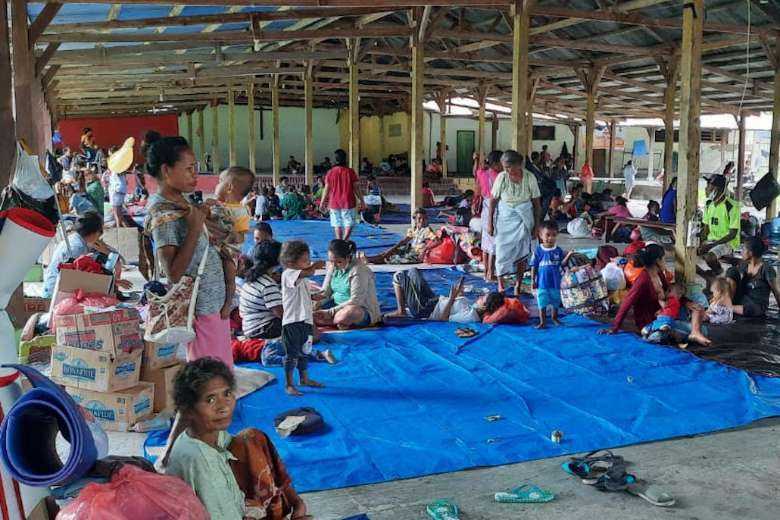 More than 4,000 victims of flash floods and landslides were taking refuge in a Catholic shelter in Malaka district of East Nusa Tenggara province on April 7. (Photo courtesy of Herry Klau)

The disasters, caused by two days of heavy rain due to the Seroja tropical cyclone, hit 12 cities and districts in the province on Easter Sunday, killing at least 128 people, according to the National Disaster Mitigation Agency.

About 72 people are reportedly missing, while 271 homes and 99 public facilities were damaged. More than 8,000 people were evacuated to shelters including ones belonging to the Catholic Church.

“On behalf of the Indonesian Bishops’ Conference, I call on you to show compassion to our brothers and sisters who are suffering in East Nusa Tenggara province and some parts of West Nusa Tenggara province,” conference chairman Cardinal Suharyo said in a five-and-a-half-minute video message uploaded on YouTube by the bishops’ Commission for Social Communications on April 7.

He said donations can be sent to the bishops’ charitable bodies such as Caritas Indonesia and the Commission for Socio-Economic Development as well as the dioceses’ Commission for Social Communications and Jakarta Archdiocese’s Lembaga Daya Dharma.

He said such compassion “is a materialization of our faith” and “can be blessings for our brothers and sisters.”

Also speaking in the video message was Sacred Heart of Jesus Archbishop Aloysius Sudarso of Palembang, chairman of the board of Caritas Indonesia, locally known as Karina.

“The Catholic Church in Indonesia will not stay silent. Our care for all those who are suffering is truly a concrete form of our faith. As a matter of fact, we just celebrated Easter, proof of the involvement of God, through Jesus, in human life,” he said.

Father Fredy Rante Taruk, executive director of Karina, told UCA News that the agency has so far received donations amounting to more than 1 billion rupiah (US$71,400).

He said Karina is working with the Commissions for Socio-Economic Development in several dioceses in distributing aid such as packages of daily necessities to victims.

“But we suggest that the dioceses’ commissions also focus on the special needs of babies, pregnant mothers and the elderly,” he said.

Maria Gorethy Bria, whose house in Naimana village of Malaka district was partly damaged, told UCA News that she and her family have taken refuge in a Catholic-managed shelter since April 5.

“We feel so sad. And we still have fears. But we are thankful that some people donate money to help us, the victims. They have pure hearts,” she said.