It's vital for laypeople to work together for the common good, says prelate 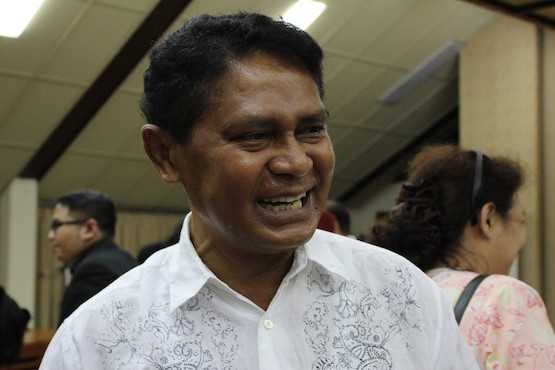 Archbishop Vincentius Sensi Potokota of Ende, chairman of Indonesian bishops' commission for laity, has called on Catholics involved in politics to unite to make a bigger impact on public life. (Photo by Ryan Dagur)

The Indonesia bishops' conference has called on Catholic groups and laypeople involved in political parties to unite their efforts to promote Christian values.

Catholics working together is the best way to realize a common goal, said Archbishop Vincentius Sensi Potokota of Ende, chairman of the bishops' laity commission, during a meeting in Jakarta on Feb. 25.

"It's important to consolidate. We must work together to achieve the common good," Archbishop Potokota told about 200 politicians and academics from different Catholic groups.

The prelate remarked that in previous years it was difficult for Catholics involved in politics to unite, which led to the situation where the Catholic ideal of creating a common welfare was not realized.

The archbishop said in the past the Catholic Church had a number of respected leaders and national heroes committed to the spirit of Catholicism. As ways of example Archbishop Potokota spoke of the national hero Ignatius Joseph Kasimo and Fransiskus Xaverius Seda, a respected former cabinet member during the era of Suharto.

Speaking with ucanews.com after the meeting, Father Guido Suprapto, the commission's executive secretary, said that the bishops want Catholic groups and laypeople involved in politics to re-strengthen Catholic values.

"The commission on laity seeks to unite Catholic figures and remind them of the mission that they must carry forward," Father Suprapto said.

To do this, more meetings will be organized for Catholic parliamentarians, governors, regents and mayors, Father Suprapto said. The bishops will also encourage more Catholics to get involved in politics in order to make changes in society, he added.

Jacobus Kristiadi, a political analyst and senior fellow at the Center for Strategic of International Studies, said that Catholic leaders must work together to help form and guide Catholic groups.

The past failure in not assisting groups or individual laypeople, he said, has contributed to many Catholics becoming engaged in corrupt and illegal practices. He pointed out that 80 percent of the population of East Nusa Tenggara province is Catholic but it ranks number one in Indonesia for corruption.

"I encourage the Catholic Church to plan a roadmap on how to guide and better prepare Catholics for politics," said Kristiadi.