Catholics obligated to work toward fighting problem, they say 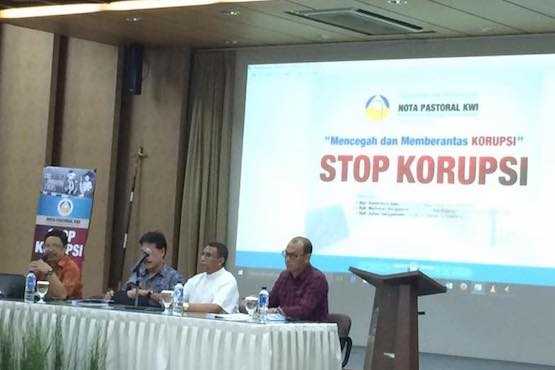 Bishop Dominikus Saku of Atambua (wearing white T-shirt), the chairman of the Indonesia Bishops' Commission for Justice, Peace and Pastoral for Migrant People, and fellow officials launch the pastoral letter against corruption in Jakarta, May 31. (ucanews.com photo)

The Bishops' Conference of Indonesia has issued a 45-page pastoral letter to reemphasize the church’s commitment to fighting rampant corruption in the country.

The letter is a follow-up to the pastoral appeal by the bishops in their annual meeting, November 2016.

Bishop Dominikus Saku of Atambua, chairman of the Bishops' Commission for Justice, Peace and Pastoral for Migrant People, told ucanews.com, "The fight against corruption must continue, be done systematically, strategically, tactically and on great scale."

According to Transparansi Indonesia's corruption perception index, Indonesia is ranked a lowly 90th out of 176 countries.

Data from Indonesia Corruption Watch reveals that during the period 2010-2015, 110 regents and 14 governors were caught up in corruption scandals.

Father Siprianus Hormat, executive secretary of the Bishops' Conference of Indonesia, said the letter describes the actions every Catholic should take to combat corruption through personal and collective commitments.

Yudas Sabbagalet, Mentawai district head in North Sumatera, said "The Catholic Church's stern attitude reminds us we must withstand every temptation of corruption and inspires us to develop good governance practices."

Meanwhile, Arman Suparman, a researcher at Regional Autonomy Watch, said the pastoral letter is important since corruption is rife, especially in government institutions.

Suparman cautioned that the church must also set a good example by fighting corruption within its hierarchy and every diocese or parish should prioritize transparency in financial management.

"It is not enough to simply issue this pastoral letter. The good shepherd must make this their way of life in order to combat corruption," he said.