Bishop Siprianus Hormat of Ruteng (wearing black) walks to a jet aircraft to be taken to hospital in Jakarta to be treated for Covid-19 on July 30. (Photo: YouTube)

The bishop of Ruteng in Indonesia’s predominantly Catholic East Nusa Tenggara province has tested positive for Covid-19 and is being treated at a Catholic-run hospital in Jakarta, a senior diocesan official said on Aug. 2.

Monsignor Siprianus Hormat was taken by jet to the capital for treatment on July 30 following two days of self-isolation at his residence after taking a rapid antigen test, according to Father Alfons Segar, the diocese’s vicar general.

“He was taken there on the recommendation of his heart specialist,” the priest told UCA News.

The 56-year-old prelate previously underwent surgery to have a stent inserted.

“We all agreed. He can have better medical treatment and medication in Jakarta,” Father Segar said.

“The bishop has a cough and feels nauseous but overall he is in good health,” he said, adding that some 20 priests and diocesan staff underwent rapid antigen tests on Aug. 2.

Indonesia has become a major Covid-19 epicenter in recent weeks

The 70-year-old prelate, who has been treated at a hospital in Timika in Mimika district since July 24, is reportedly recovering.

Indonesia has become a major Covid-19 epicenter in recent weeks with an average of 50,000 new infections and death tolls now exceeding 1,400 per day. 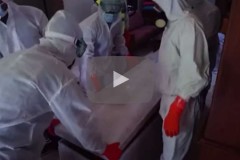 Indonesian nuns do their bit amid Covid-19 surge