A pregnant mother who lost her baby because she failed to reach a local hospital in time due to travel restrictions has prompted the governor of Indonesia’s Christian-majority East Nusa Tenggara province to relax Covid-19 lockdown rules.

District heads have been told to remove all roadblocks connecting districts and at vital facilities and to exercise more discretion and flexibility when implementing restrictions and social distancing measures.

The baby’s death was unnecessary and should be a lesson for all local leaders, governor Viktor Bungtilu Laiskodat told a meeting with 22 district chiefs on May 26.

The mother could not reach the hospital in time on May 23 to give birth as the ambulance carrying her was delayed at a checkpoint. By the time she reached hospital, the baby had already died.

She was told by the doctor that the baby could have been saved had they arrived at the hospital earlier.

Laiskodat told the district heads to be wise in implementing Covid-19 protocols and make sure they save and not cost people’s lives. "Dismantle all the roadblocks," he said.

Travel restrictions which have seen the setting up of checkpoints often see a build-up of traffic as people try to pass through them.

Laiskodat also said all government offices and public facilities, including markets, will reopen on June 15, while areas where there have been no Covid-19 cases can reopen immediately.

“I do not want my people to live in excessive fear of this virus,” he added.

Even so, he said, he called on people to stick to health protocols, such as wearing masks, washing hands regularly and avoiding large crowds. 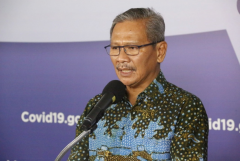 Provincial spokesman Marius Ardu Jelamu told reporters that places of worship would also be permitted to reopen and religious leaders would be expected to ensure social distancing rules are followed.

Father Max Regus, head of the Covid-19 task force in Ruteng Diocese, said the governor's directives would be discussed with the bishop.

"So far restrictions on church activities have yet to be lifted,” he told UCA News.

Maria Dius, a health worker in East Manggarai district, said she and her colleagues felt uneasy about the governor easing restrictions at this time.

"Lifting restrictions while the virus is prevalent can trigger a spike in new cases,” she said. "Authorities should be working harder to ensure that people adhere to the rules.”