Refusing Covid-19 vaccines is a sin as it puts others at risk, says virus-infected prelate People who refuse to be vaccinated against Covid-19 are sinners for endangering other people, according to an Indonesian archbishop who has been infected with the virus.

"Let's not say that I don't need to be vaccinated. If you don't want to be vaccinated, you are actually a sinner because you will become a source of the disease for other people," said Archbishop Petrus Canisius Mandagi of Merauke.

He was speaking at a Mass at the Sacred Heart of Jesus Church in West Olilit, Maluku, on Sept.  22.

He invited his flock to think about the impact of Covid-19, which has killed millions of people worldwide.

"If we are not careful, everyone will die from Covid-19," said Archbishop Mandagi, who is also the apostolic administrator of Amboina Diocese.

The archbishop also urged his flock to think about their health and the health of others, including telling smokers to stop so that they do not fall victim to the virus.

In the context of Papua, there is a long-standing mistrust among Papuans regarding the government, so vaccines are viewed with suspicion

"May they [smokers] repent," said the 72-year-old bishop, who was infected with Covid in January along with several priests in Amboina Diocese.

The archbishop's comments come amid reports that many people are still refusing to be vaccinated in Indonesia.

On Sept. 16, West Papua province returned 877 vials of AstraZeneca vaccine to the Health Ministry because many refused to be vaccinated.

A survey by pollster National Survey Media released on Sept. 9 found that 45.7 percent of Indonesians are still reluctant to be vaccinated, with the highest number in eastern Indonesia including Papua. 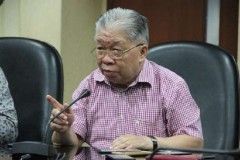 A survey in August by Indonesian Political Indicators showed 56.9 percent were not willing to be vaccinated.

The majority in both surveys were worried about the vaccine’s side effects.

Father John Djonga, an activist priest in Papua, said encouragement from religious figures was important to make communities realize the importance of receiving the vaccine.

"In the context of Papua, there is a long-standing mistrust among Papuans regarding the government, so vaccines are viewed with suspicion, especially when vaccination distribution involves the security forces," he told UCA News.

"We have conveyed this directly to the government and urged that vaccination drives only involve medical people."

Indonesia is looking to vaccinate at least 208 million people. As of Sept. 21, about 38 percent of that target had received a first dose and 21.7 percent had been fully vaccinated, according to government figures.

DONNA
I will not get vaccinated. I cannot take vaccines under the instruction of my doctor. I dont need any Priest, Bishop or Archbishop telling me what to do with my health decisions. Each person is there own person and NO ONE has the right to tell me I am sinning. The vaccine actually is the cause for the pandemic as it sheds off to the unvaccinated causing them to get the virus THIS IS PROVEN.... This bishop needs to go to confession and REPENT of his evil ways
Reply

ATANAMIR
This bishop is evil and is an ally of the devil himself.
Reply

CP
This is such a FALSE statement. People who have received the vaccine can catch and spread the virus, so what is the difference if you are vaccinated or not. This man has NO regard for facts and should not be trusted.
Reply

STEFAN SLOVAK
Is this The Real Catholic Church preaching the theology of vaccination?
×
SHARE YOUR COMMENTS