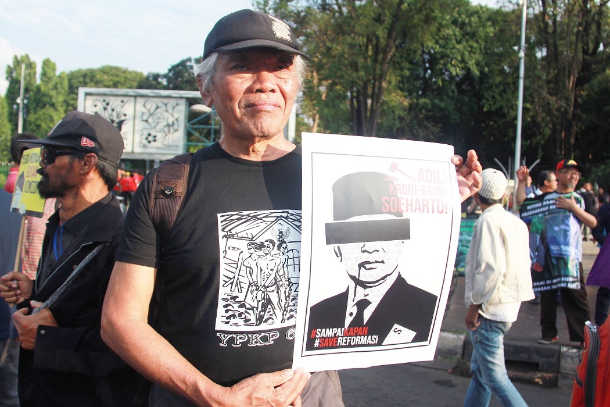 Bedjo Untung holds a picture of Suharto during a protest outside the Presidential Palace in Jakarta in 2019. Untung was awarded the 2020 Gwangju Prize for Human Rights on March 20. (Photo: Konradus Epa/UCA News)

A victim of Indonesia’s anti-communist purge and renowned activist, Bedjo Untung, has won the 2020 Gwangju Prize for Human Rights from the May 18 Foundation in South Korea.

Moon Kyu-hyun, a Catholic priest and chief of the prize screening committee, announced Untung as the winner on March 20.

Untung is the founder of the 1965 Murder Victims Research Foundation, a group that seeks justice for victims of an anti-communist purge that saw the deaths of at least 500,000 people at the hands of the country’s military dictatorship in the 1960s.

The Gwangju Prize commemorates the 1980 pro-democracy uprising in Gwangju, South Korea, in which hundreds of people were killed during protests against the military junta of Chun Doo-hwan.

To mark the tragedy, the foundation has given the award since 2000 to various groups, individuals and institutions that struggle for democracy and justice.

“This prize respects my struggle to find justice for all victims and encourages me to continue the struggle,” Untung, 78, told UCA News on March 22.

The US$50,000 which goes with the prize will be used to fund the activities of his organization. However, he will have to wait to pick up his prize as the award ceremony in South Korea has been postponed until October due to the Covid-19 pandemic.

Untung said he was recognized for his fight against Suharto’s dictatorship and for his speaking out against the 1965 massacres.

In 1970, he was arrested by the Indonesian military intelligence agency and detained for nine years without any legal process before being freed in 1979.

The activist and several former political prisoners established the 1965 Murder Victims Research Foundation on April 7, 1999, to seek the truth and justice about the tragedy.

Since then he has looked for mass graves, met victims and their families, and campaigned for their political rights.

“We all are glad and proud because our struggle has received the support of the international community,” Untung also said of the award.

In 2015, Untung acted as a witness to the horrors during a hearing at the International Criminal Court in the Hague, Netherlands, which acknowledged the slaughter in the 1960s as a crime against humanity.

Untung received an award from South Korea's Truth Foundation in 2017.

Putri Kanesia, the deputy coordinator of the Commission for Disappeared and Victims of Violence (KontraS), said Untung was honored because of his persistence and struggle to set right the injustices of the massacres and persecution that followed.

“I hope this prize further encourages victims and their families as they continue to face discrimination,” she told UCA News.

Beka Ulung Hapsari, a commissioner of the National Commission of Human Rights, said the prize was recognition of Untung’s dedication and struggle for humanity and justice.

“It shows Bedjo Untung’s efforts to promote human rights and justice for victims have been recognized by various international human rights communities,” he told UCA News.

He said the prize is a reminder for the government to settle all gross human rights abuses.